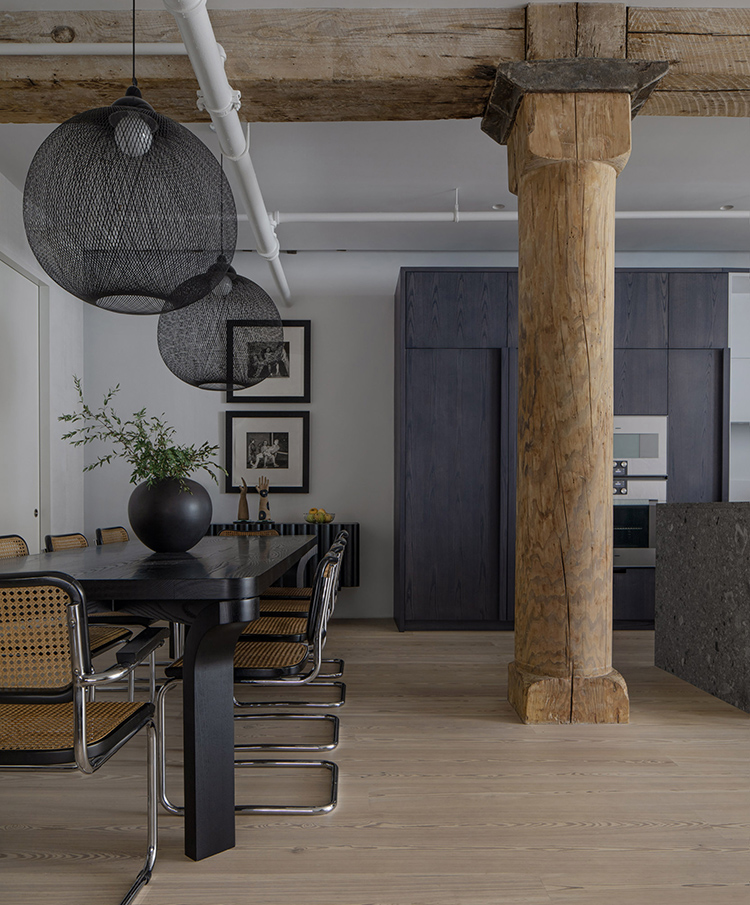 New York architecture studio Worrell Yeung has brought new life to a former artist’s studio in the city, stripping paint off wood pillars and adding a large kitchen island. Located in Manhattan’s Chelsea neighbourhood, the project is a two-bedroom apartment that spans half of a floor in an early 20th-century building.

It was previously occupied by an artist and art handler for the Museum of Modern Art and had not been updated in nearly 40 years. Seafoam green paint coated historic wood pillars and the ceiling was clad in tin tiles.

Worrell Yeung’s overhaul of the 2,200-square-foot (204-square-metre) apartment involved stripping back these finishes, painting the walls and ceiling white and adding in reclaimed pine wood floors from Madera. “Timber columns and beams, cast-iron capitals, and wood timber ceiling joists were left raw and exposed, particularly in the generous living area, to maintain the spirit of the New York artist’s loft,” said the studio. The studio designed a new kitchen in between two of the pale wooden columns. The island is covered in Ceppo di Gre marble and forms a centrepiece of the open-plan Chelsea Loft.

“There was a strong desire to express the island’s ‘object-ness’ by keeping it very elemental in form, yet still arranging the stone planes to invite comfortable congregation with these square stone niches that embed into the wood floor,” said Worrell Yeung co-founder Jejon Yeung.

The studio has designed two other New York apartments – a penthouse in Downtown Brooklyn and two-storey unit in the NoMad neighbourhood – where the kitchen island is also a key feature.

Chelsea Loft includes an open-plan kitchen, dining and living room, joined by a smaller sitting area and a powder room. On the opposite side of the home, a master bedroom has a walk-in closet and bathroom, while a children’s bedroom is complete with a bathroom clad in yellow tiles. “The organising design strategy of this renovation was to maintain contiguous public living zones and extend daylight as far as it can reach by minimising partitions and concentrating private rooms on the north side of the apartment,” said the studio.

The interior decor was created with Jean Lin, the founder of local design collective Colony. It includes a black dining table by Brooklyn studio Vonnegut/Kraft, several tables from Washington studio Grain, and numerous pieces by Cassina including a red velvet sofa, rattan coffee table and Utrecht chair. Other details are vintage Marcel Breuer Cesca dining chairs, black stools by Hollis and Morris, Noguchi light fixtures, and a collection of artwork owned by the clients, ranging from figure drawings and paintings to abstract pieces.

“The design and overall material experience of the home very much reflect the client’s playfulness and complements their eclectic art collection,” said Max Worrell, who founded the studio with Yeung in 2014. Rounding out the design are exposed pipes, white-pigmented ash wood closets and casework, and kitchen cabinetry in dark-stained ash wood. 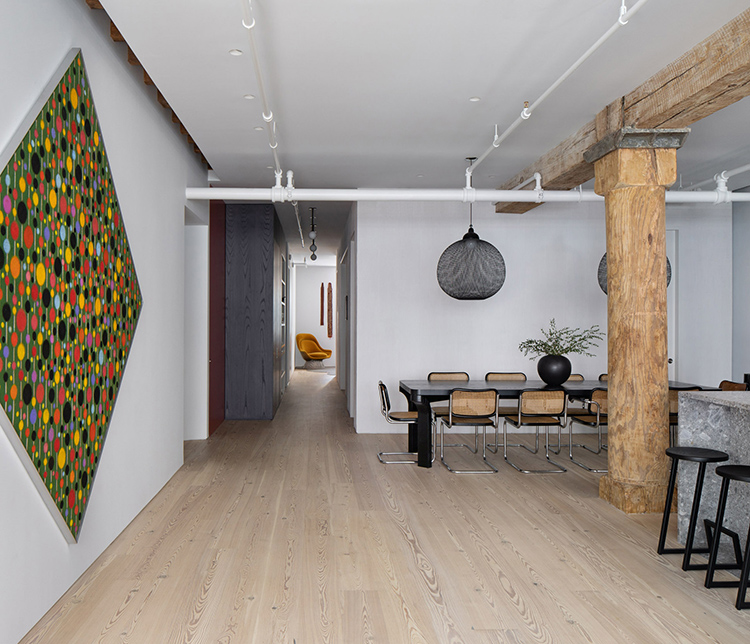 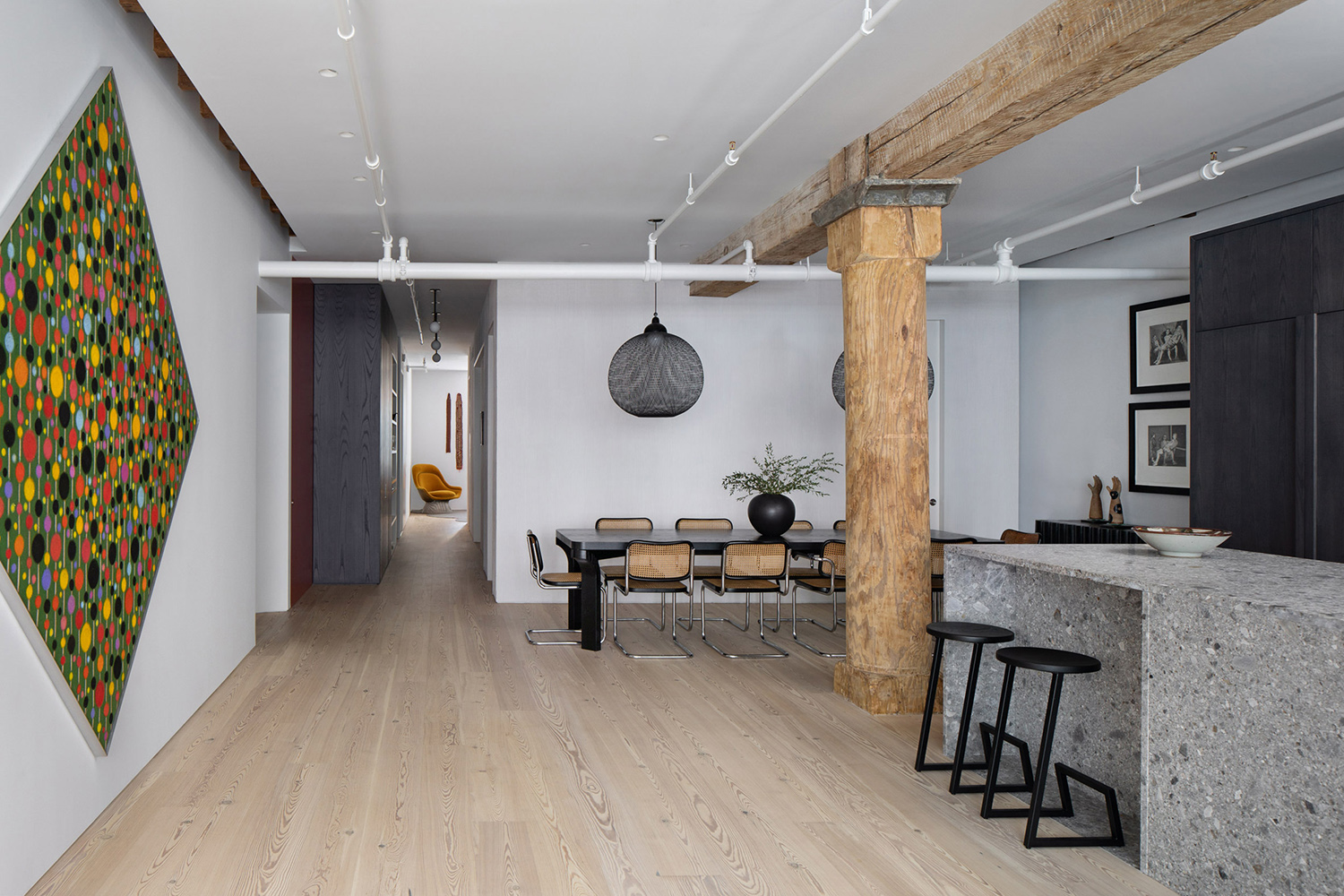 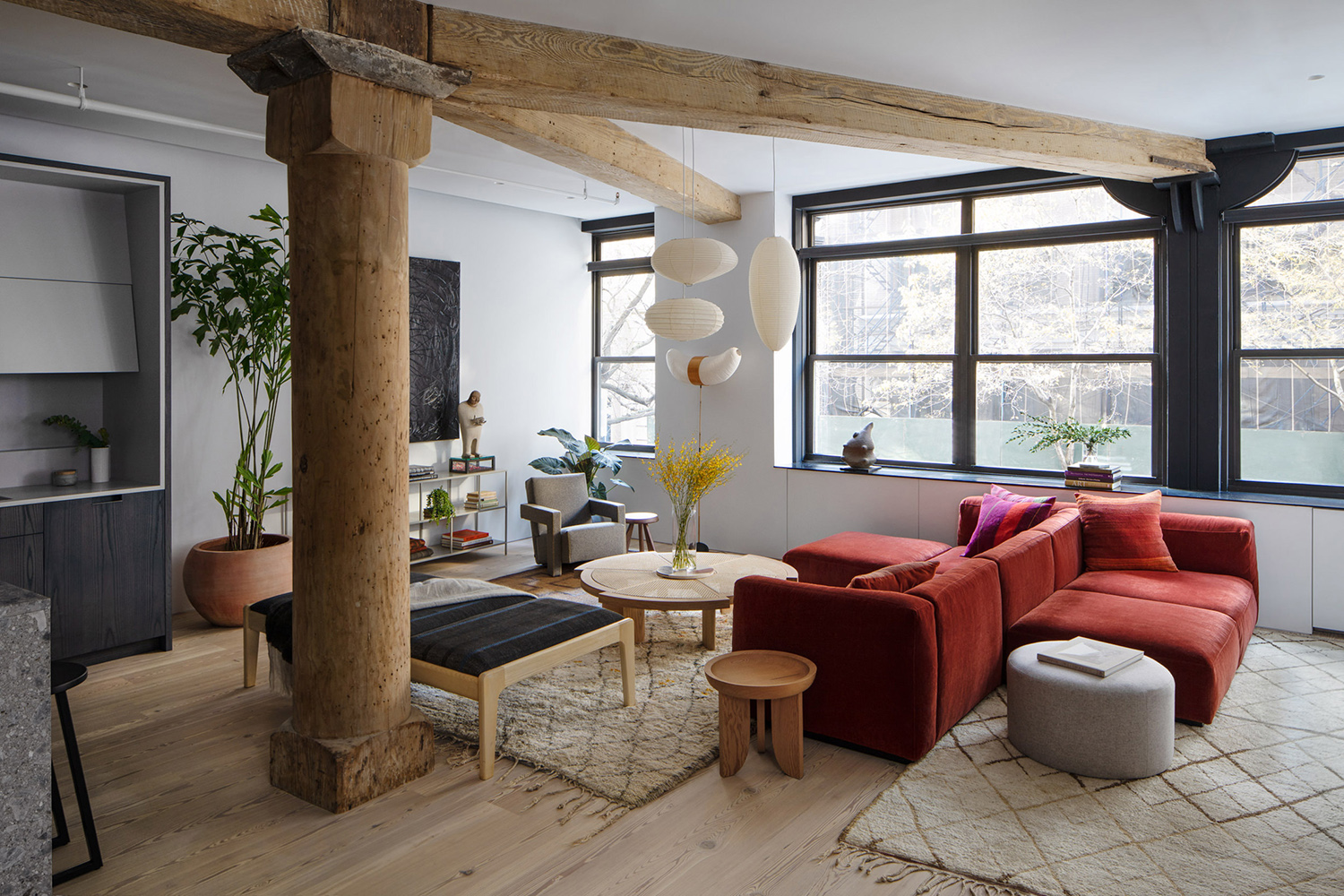 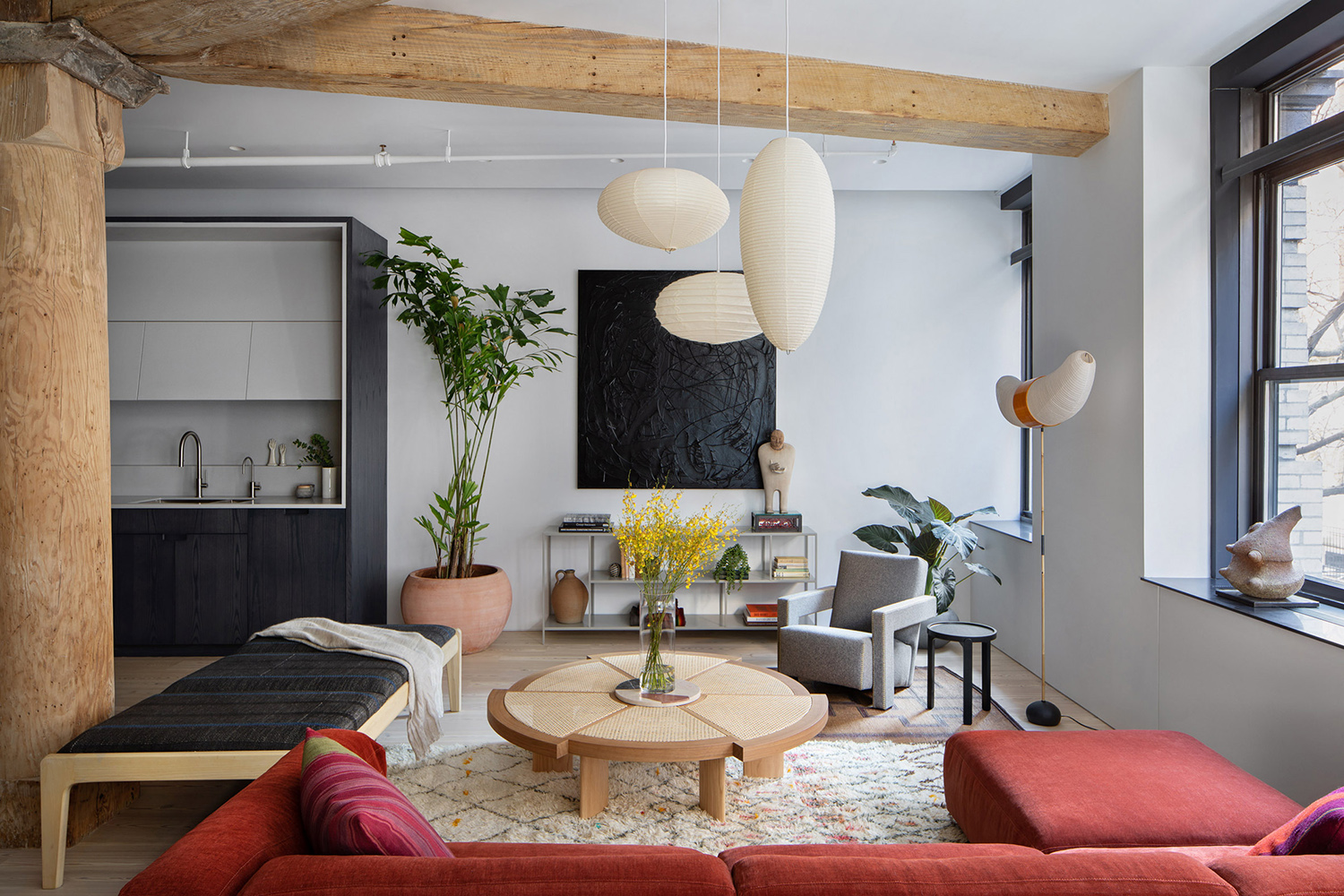 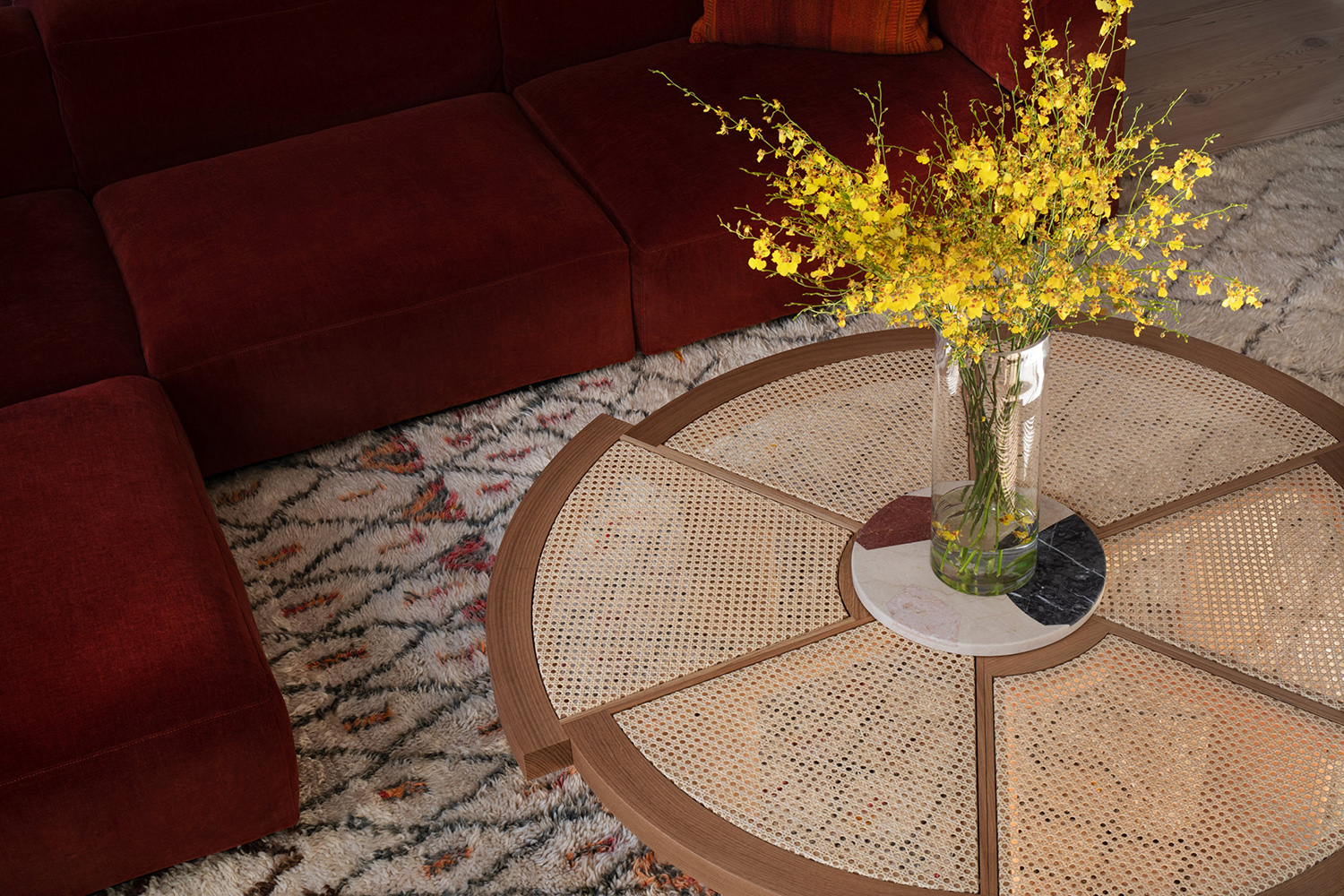 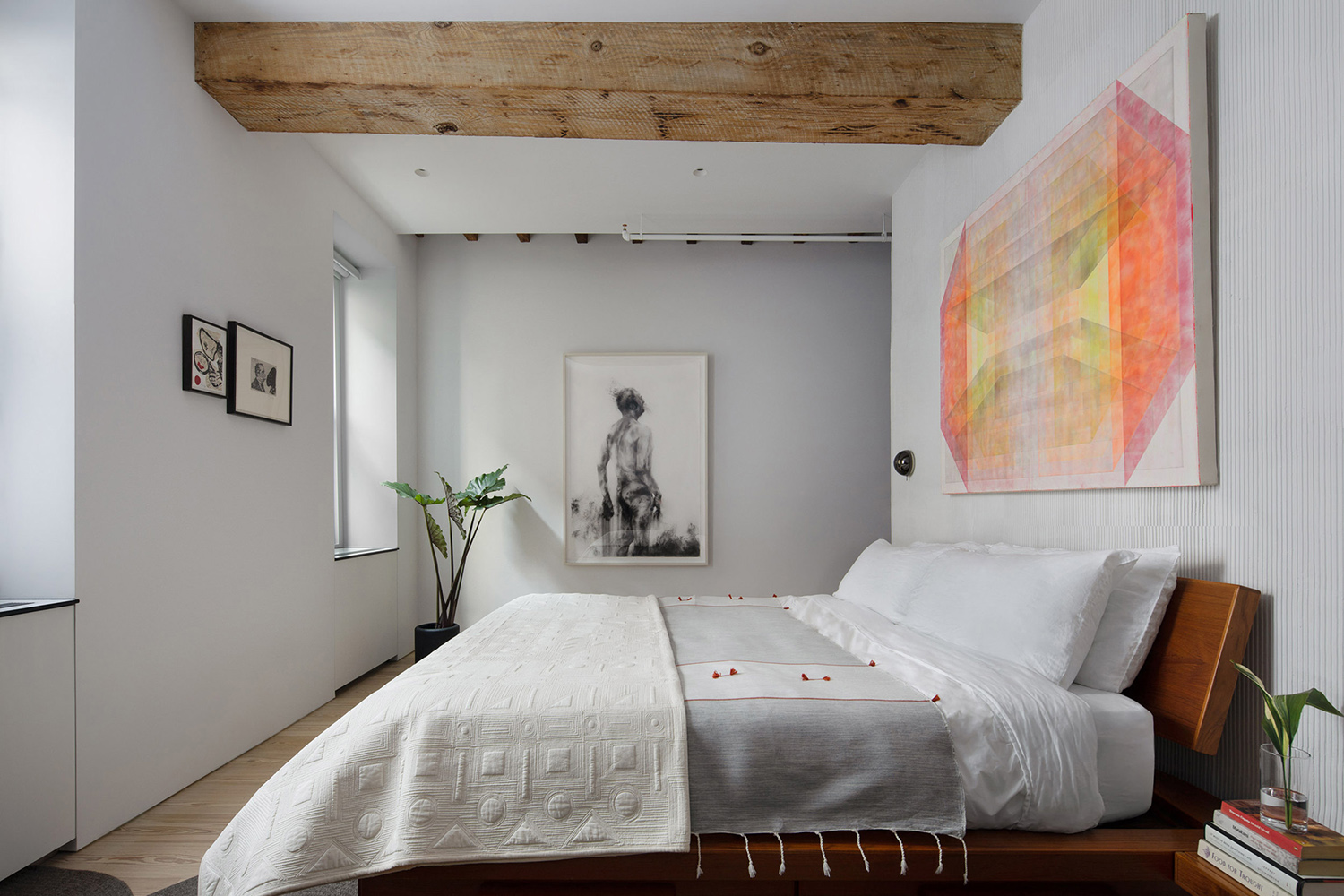 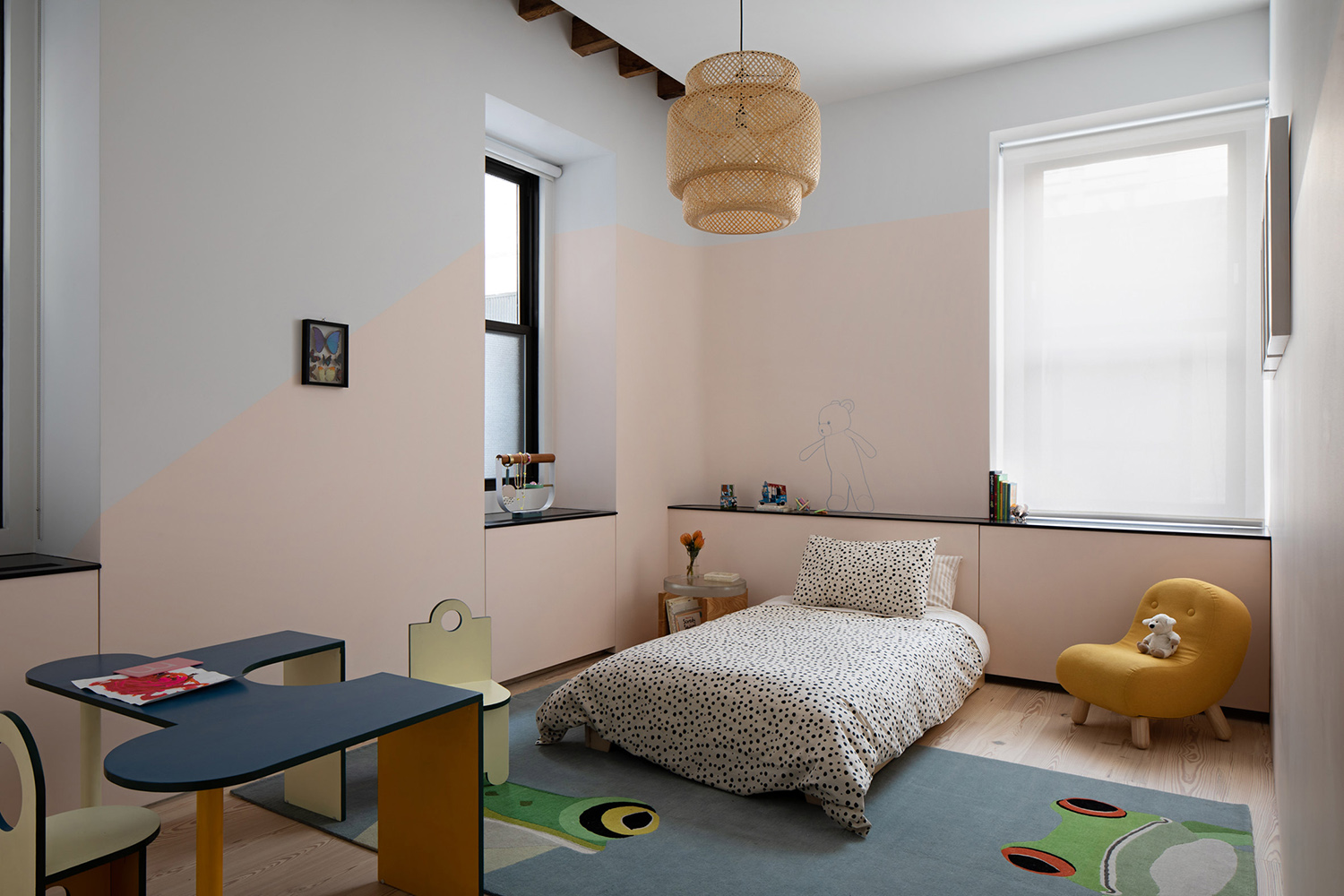 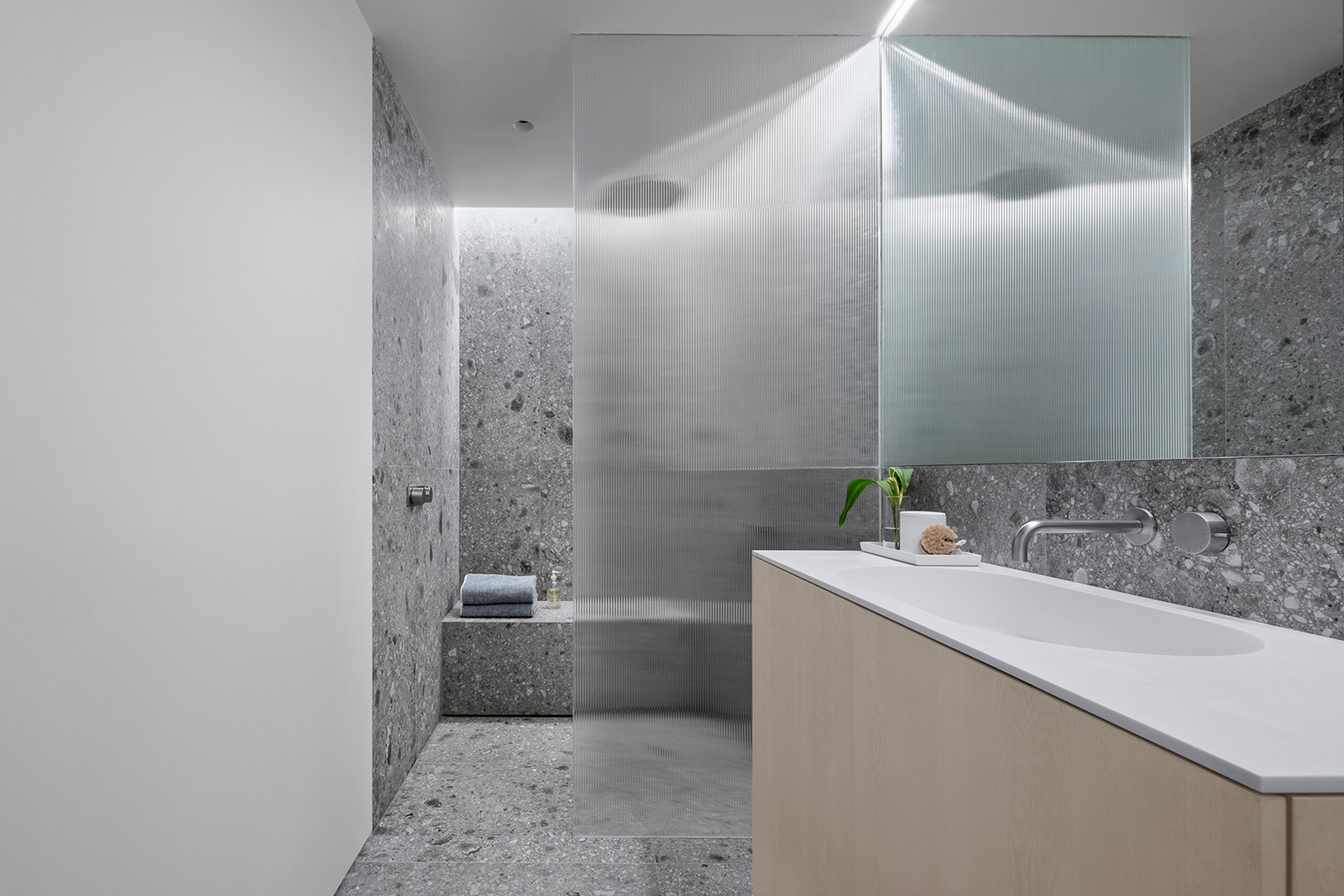