The successful marriage of functionality and aesthetics is usually a reliable yardstick for parsing good design but perhaps the ultimate litmus test is the test of time, albeit one that can only be applied retrospectively. Whichever criteria you pick, the work of late Italian architect and industrial designer Angelo Mangiarotti, whose 100th anniversary from his birth is this year, not only exemplifies what good design looks and feels like, but also embodies timelessness, both conceptually and practically. A master of twentieth-century Italian design, Mangiarotti’s projects are staunchly modernist in their simplicity and practicality but at the same time highly experimental and original, making them a paradigm of contemporary design and cutting-edge ethos even decades after he designed them.

If you’re not familiar with the enduring appeal and unparallel originality of the designer’s oeuvre, look no further than Agapecasa, a unique collaboration between Studio Mangiarotti and leading Italian bath ware company Agape which has re-introduced a selection of Mangiarotti’s most famous furniture designs. 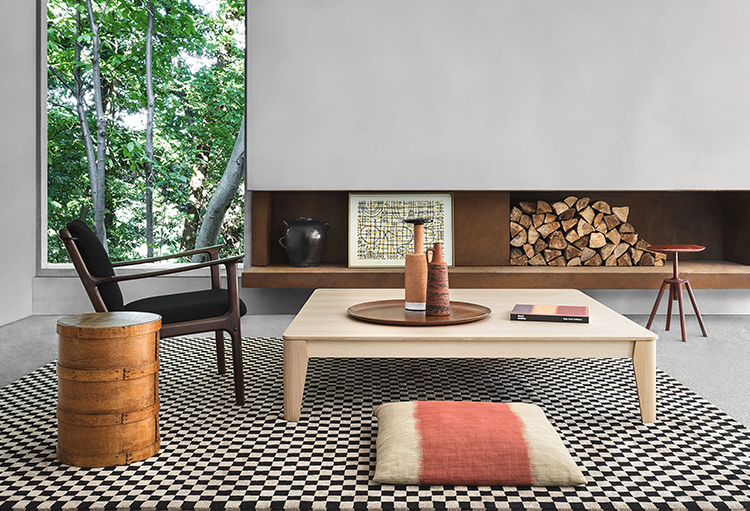 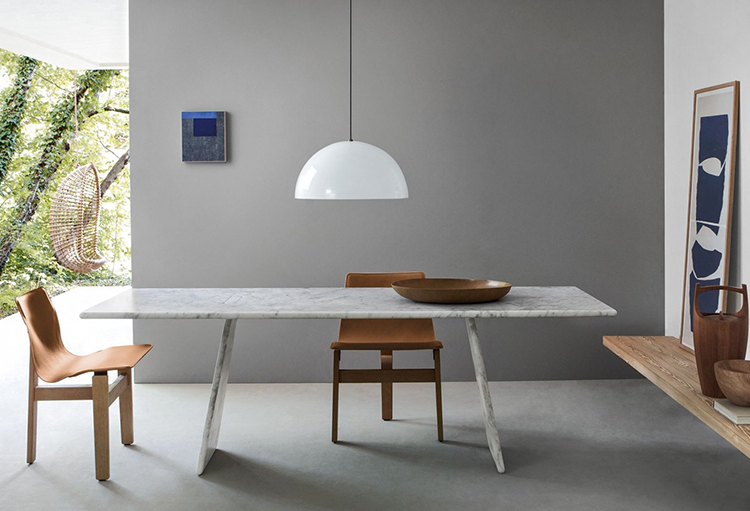 Comprising chairs, tables, bookcases and containers designed over the course of four decades beginning in the mid-1950s, including Eros, a joint-less marble table that’s love at first sight the moment you come across it, the Mangiarotti Collection showcases the designer’s singular approach to style, form and construction, as well as demonstrates why his legacy looms large in the international design community – not to mention it makes for the ultimate wish list for design aficionados.

Stretching over six decades and across several disciplines, Mangiarotti’s career is an extraordinary story of experimentation, creativity and rare vision that makes him a veritable Renaissance man. Although he trained as an architect, he was also an urban planner, an engineer – in the early 1960s he revolutionized prefabricated construction systems – a ground-breaking industrial designer and a talented sculptor; he also taught in several universities and published numerous books on design and architecture.

Whatever his role, architect, engineer, designer or artist, his approach to design was always simultaneously based on fluidity and mathematics. A modernist at heart, Mangiarotti was a strong advocate of rigorous functionalism, adhering to rationalist principles of purity of line and simplicity of construction, whilst also being a highly intuitive artist with an exceptional eye, who always pursued elegance and beauty.

For Mangiarotti, although function was at the heart of industrial design, artisan craftwork also played a strong role. Fascinated by materials and their qualities, he explored their tactile and formal values, playing with their weight and volume, and pushing conventional boundaries. Underpinned by ground-breaking ideas and innovative techniques, in Mangiarotti’s hands marble becomes lightweight, iron effuses sensuality, and wood seems to move freely, imbuing his work with a singular sculptural presence often lacking in late-20th-century modernist design.

Developed from original drawings and models by Mangiarotti, every piece in Agapecasa’s collection was carefully analysed and updated by acclaimed architect, designer and Agape co-founder Giampaolo Benedini to conform to today’s current standards of quality, strength and safety requirements. Including pieces from the 1950s, 60s, 70s and 80s through to 1990, the Mangiarotti Collection brings to life the designer’s most extraordinary designs as well as functions as a career retrospective.

In the mid-1950s, Mangiarotti began experimenting with plywood, shaping thin layers into curving forms to increase rigidity, giving strength and stability to lightweight structures. The Compensato table series that evolved from these experimentations is an innovative take on mid-century Scandinavian design, and are still impressive even today with their streamlined minimalism and compositional precision.

Another popular design from the same period that exemplifies the timelessness of Mangiarotti’s work as well as his focus on functionality and versatility is Cavalletto, a modular shelving unit made entirely of wood. Patented over fifty years ago now, it features a trestle in the shape of an upturned “V”, which allows shelves to be stacked by means of a simple gravity joint. Made out of multi-layered poplar with a choice of natural, brown or dark finishes, Cavalletto now also comes in a bench version that can be combined with the shelving units.

Gravity joints found their most audacious and sophisticated application in 1971 with Mangiarotti’s signature series of marble tables that eliminate the need for any joints or screws. Having used the material a couple of years earlier for his M table, a robust yet poised piece of sculptural design, marble finds its apotheosis in his Eros tables where the base is held in place by the weight of the table top. Designed in various forms and sizes, each one with its own specific gravity joint, the series constituted the apex of Mangiarotti’s research into embedded furniture.

Eros was followed in 1978 by Incas, a series of tables that swaps the circular tops and conical legs of Eros for rectangular tops and truncated pyramid-shaped legs, followed by Eccentrico in 1979, an iconic composition featuring an elliptical tabletop embedded asymmetrically into an inclined cylindrical leg that made Mangiarotti a design superstar, and Asolo in 1981, whose trapezoid-shaped legs are the same thickness as the rectangular top. All four series are now available in the original white Carrara, grey Carnic and black Marquinia marble, as well as two new versions in green Alpi and Emperador marble. Meanwhile, the More table series from 1989, the collection’s most recently designed piece features gravity joints, and combines marble or plywood tops with four steel legs.

The designer’s enduring fascination with marble is attested by his Loico modular bookshelves, a system of cylindrical, stackable weight-bearing marble elements, and Clizia, a sinuous, cantilevered seat designed in 1990 whose monolithic form belies a complex design and elaborate manufacturing process. The seat is crafted from a single block of marble, surgically carved by numerically controlled machines in such a way as to simultaneously create two chairs, reducing waste to a minimum.

Rounding up the collection, the TRE 3 chair combines wood and leather with a minimal silhouette, the Club 44 armchairs echo the V shape of the Cavalletto system, and the SK207 table from 1959 features a conical bronze base crafted using the ancient technique of lost-wax casting, as are the CAP53 bronze vases which were originally designed in 1962. In every case, the originality and timelessness of Mangiarotti’s design ethos shine through as do Agape’s hallmark qualities of sobriety, elegance, experimentation and quality. 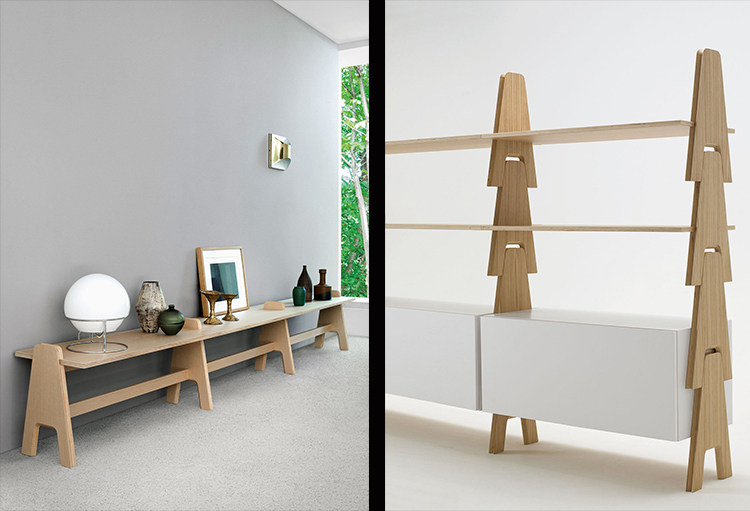 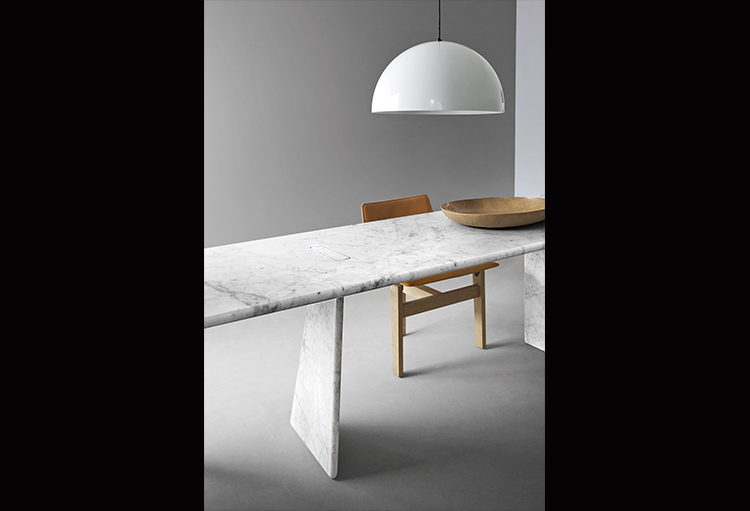 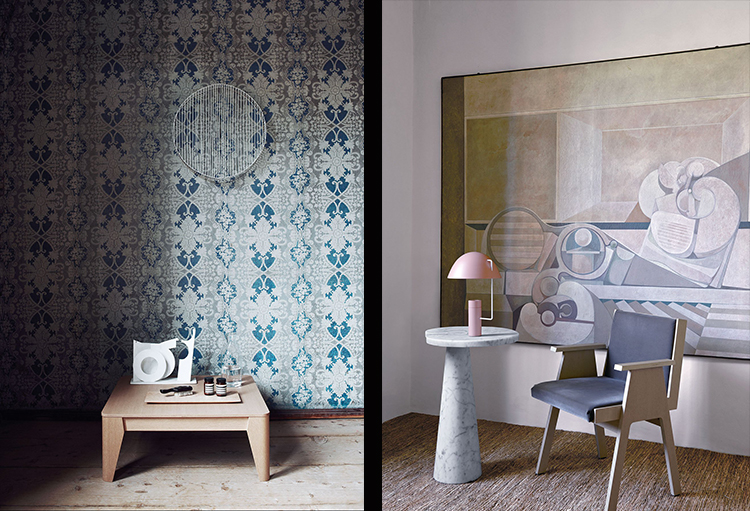 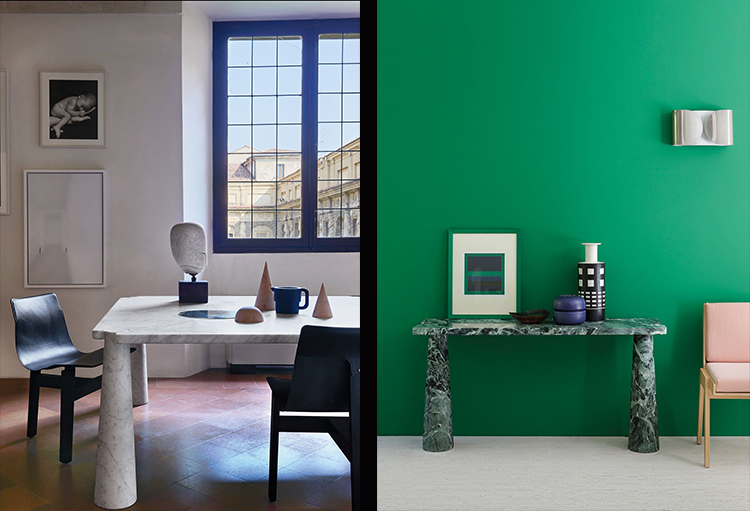 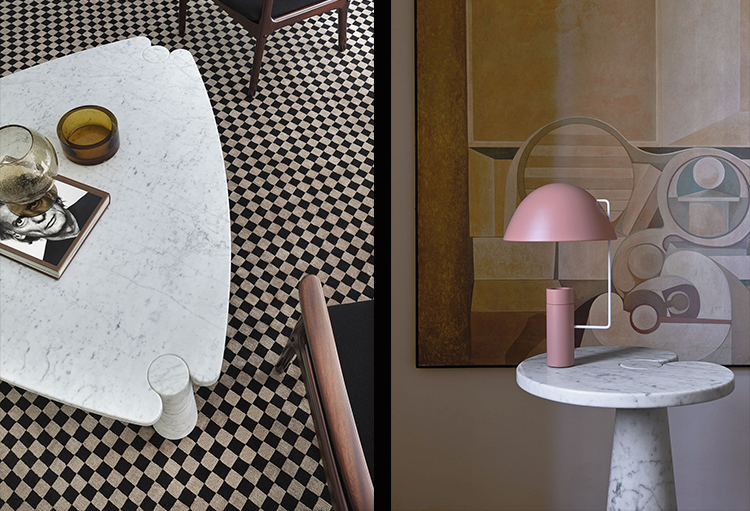 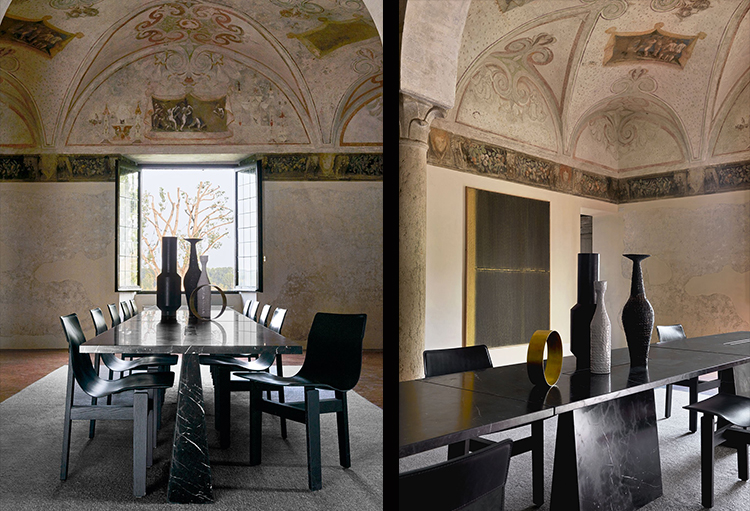 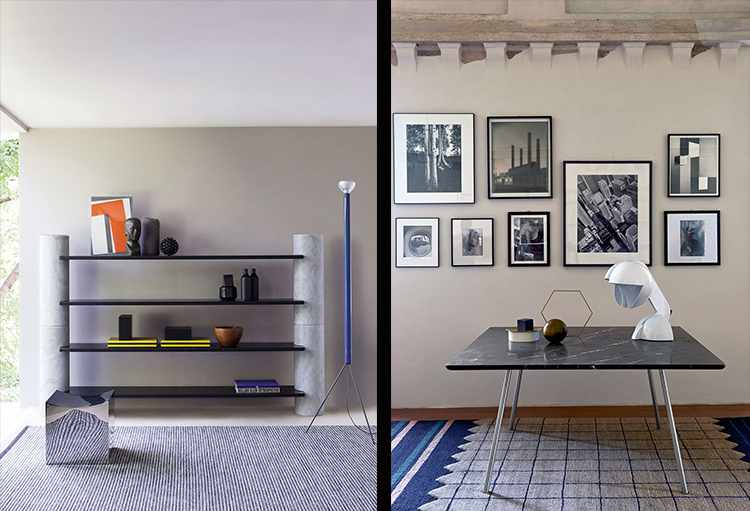 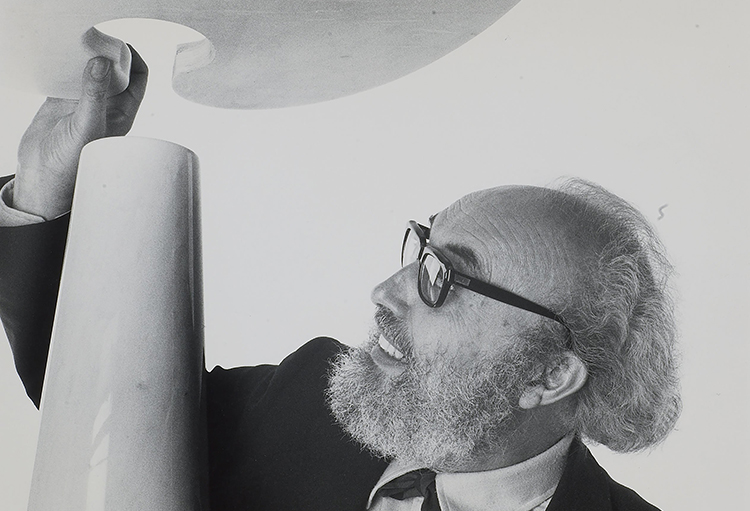 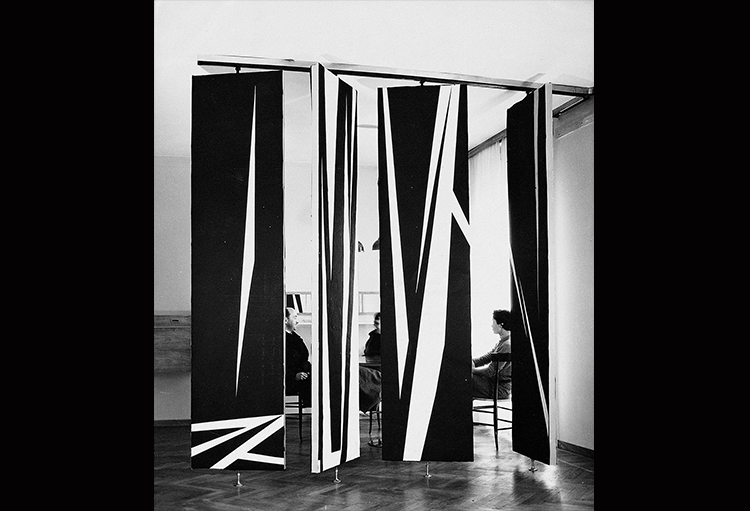 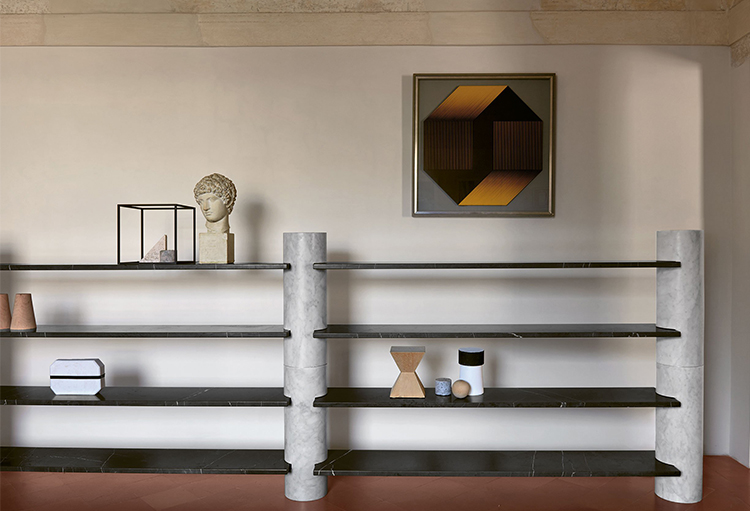