This project was conceived after Areas, an international company and leader in Food & Beverage and Travel Retail, invited Sandra Tarruella Interioristas to collaborate on a new restaurant concept that difered in aesthetics and service from its existing projects portolio, therefore, participating in the AENA 2012 competition for the management of establishments for the Adolfo Suárez Madrid-Barajas International Airport.

The location, on the second foor of the airport, was an old 600 SQM restaurant from the company located nearby the access to the Air Shuttle and VIP room. Due to its location, the customer profile, which allocated this new service, were executives taking the air shutle fights and professionals working at the airport.

For this new Project, Sandra Tarruella’s team remodeled fully the existing premises, by working with high communication volumes designed based on a finishes’ composition, as well as a topographical play of levels that helped organize and gave hierarchy to the space in the dining areas, and kitchen or service zones.

The main challenge was to energize and enhance the preparation of dishes and the exposure of products, and be able to stand out- with its quality standards- from the rest of the competition and invite people to come in.

The strategy was to divide the preparation of hot foods, cold foods and desserts, as well as beverages, in various locations of the space to polarize the activity and its atractiveness. To achieve this, we kept the existing location of the hot show kitchen, but a new zone for salads and desserts was created, a new white marble bar was made for drinks and coffee, as well as a wine shelf made in iron, wood and deploye metal mesh to display and store wine bottles. 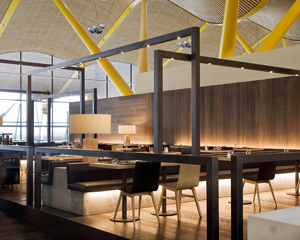