The whimsical monochrome interior of this Montreal residence, overhauled by Canadian architect Jean Verville, creates optical illusions for its residents to enjoy as they move through the space.Called IN 2, the 100-square-metre project entailed transforming the interiors of a 1950s urban cottage in the city's Villeray neighbourhood. It was commissioned by a couple who loves contemporary art, theatre, music and dance, along with digital art and video installations.Jean Verville, who runs an eponymous Montreal-based studio, stripped the home's interior of its original finishes and fixtures.

He then set out to create a full-time residence that merged art and everyday life, and required a "high degree of user participation".The architect transformed conventional rooms into a series of austere spaces rendered in black and white, which "produces optical effects oscillating between reality and abstraction". At times, two-dimensional surfaces appear to be three-dimensional due to the monochromatic scheme.Throughout the dwelling, boundaries and scale are intended to be abstracted and blurred. "The architectural intervention blurs the reading of spaces with volumetric assemblages and visual breakthroughs, contrasts and tensions, scale games and trompe-l'oeil," the architect said.

In the kitchen, the architect installed all-black cabinetry, countertops and appliances, and LED micro strips. The exposed ceiling, walls and flooring were also painted black. Black-framed windows bring natural light into the space while also offering views of the leafy yard.In the dining room, the architect placed a wooden table and chair, all painted white. A window is concealed by a floor-to-ceiling white curtain. A black sculpture by Canadian artist France Goneau, suspended within a plexiglass box, hangs on one wall.

A bathroom is completely covered in black, square ceramic tiles, which are contrasted with bright metal fixtures and a white bathtub, toilet and sink. Similar to the kitchen, the architect stretched LED micro strips across the ceiling. Mirrors visually enlarge the space and create an illusionary effect.Overall, the home's atmosphere is intended to feel playful. "This architectural journey, animated by whimsical touches that unload the intervention of the coldness and seriousness often associated with contemporary architecture, calls for an experience completely altered by illusion, and this, for the delight of its owners," the studio said. 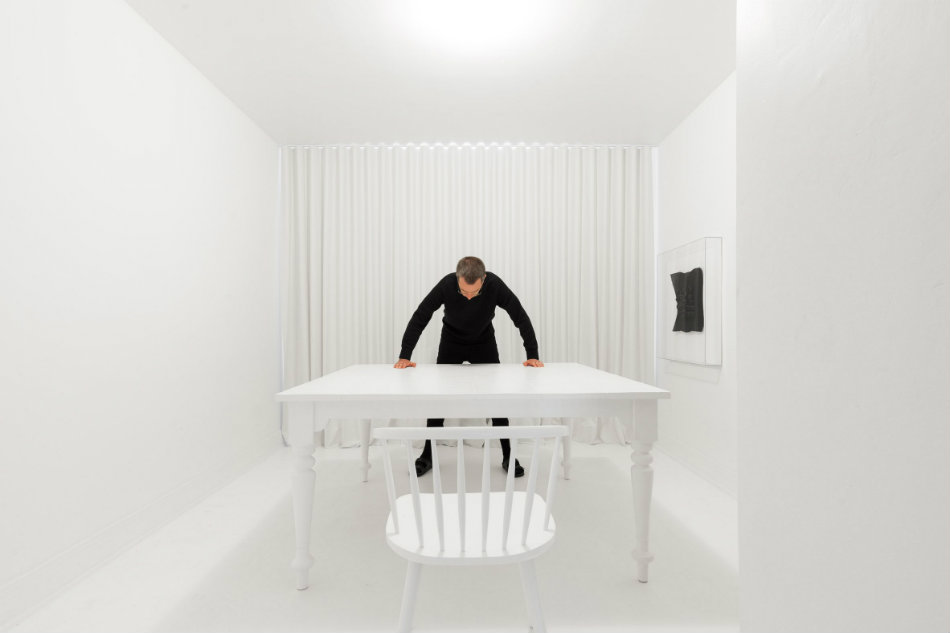 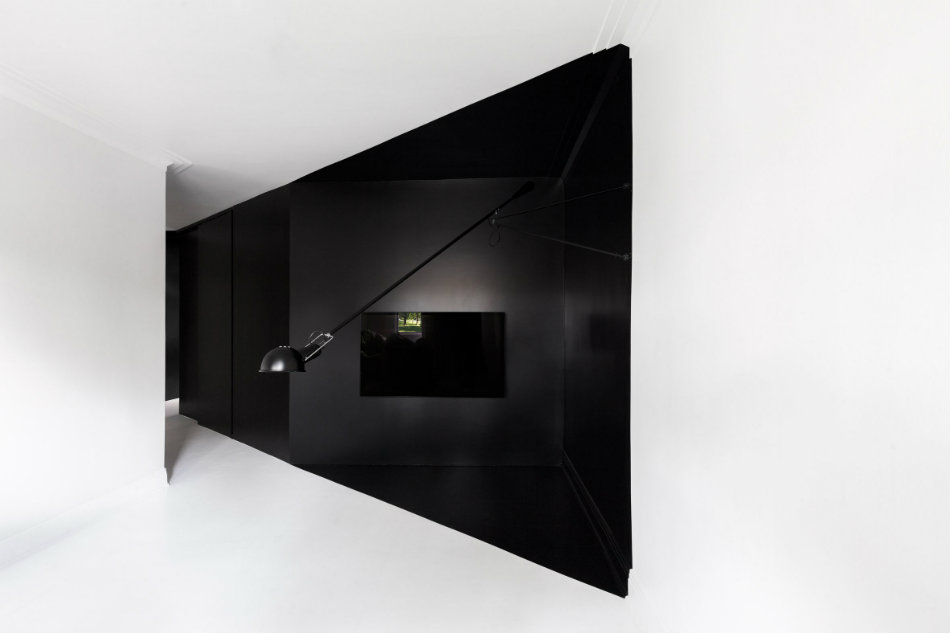 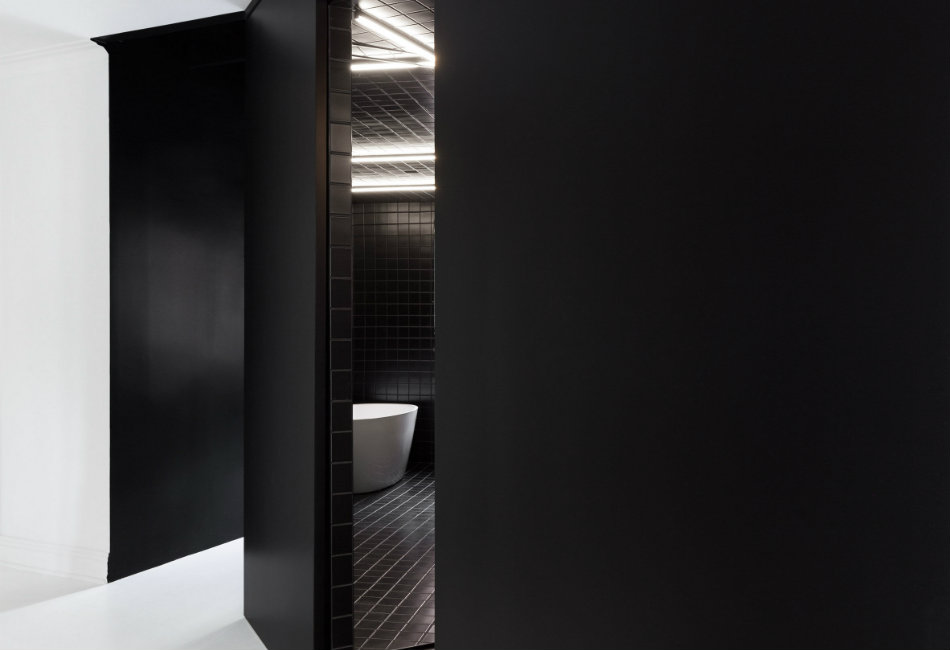 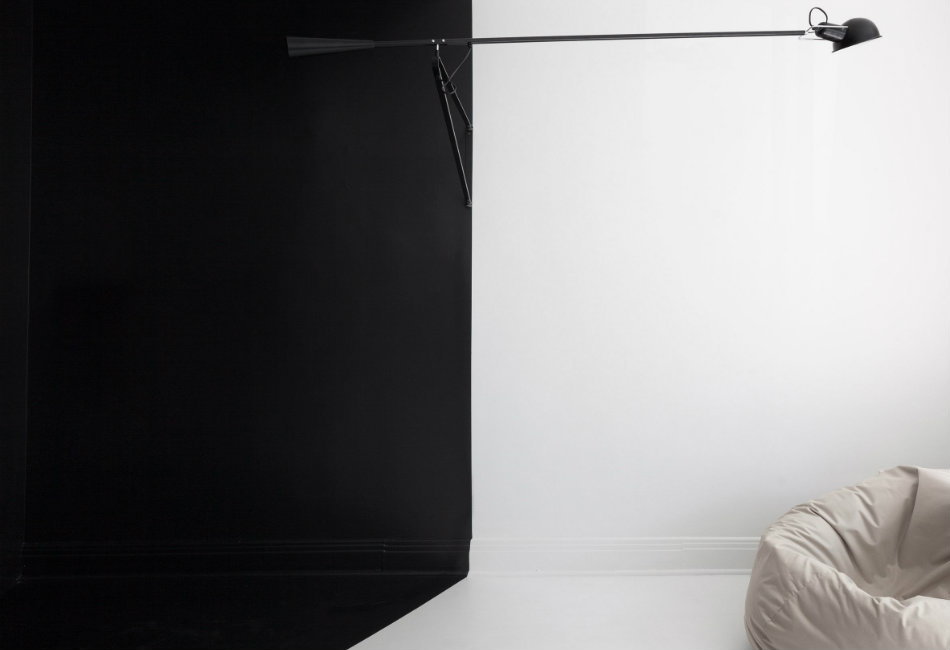 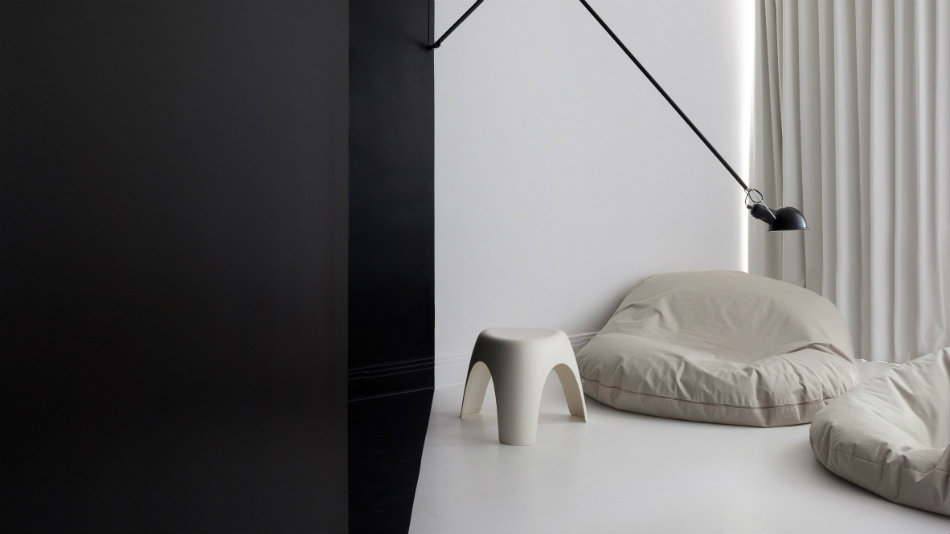 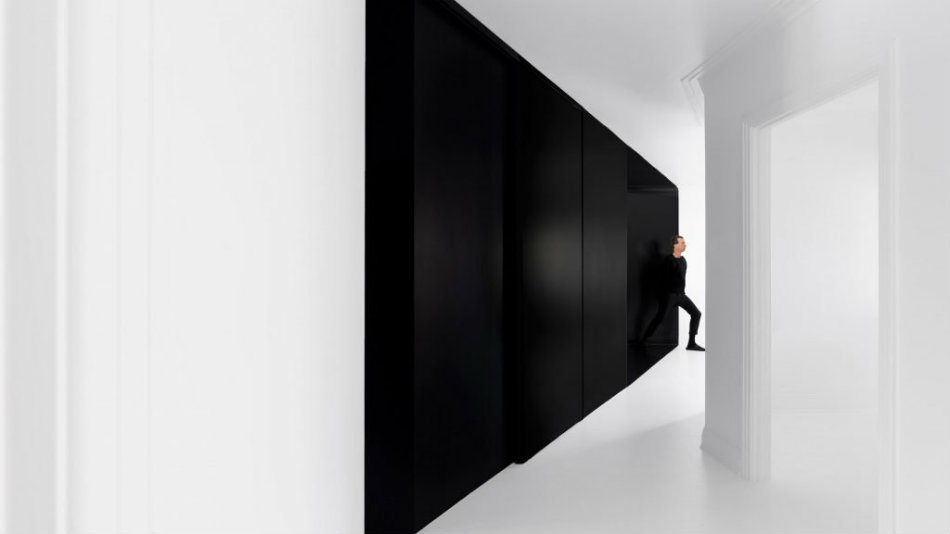 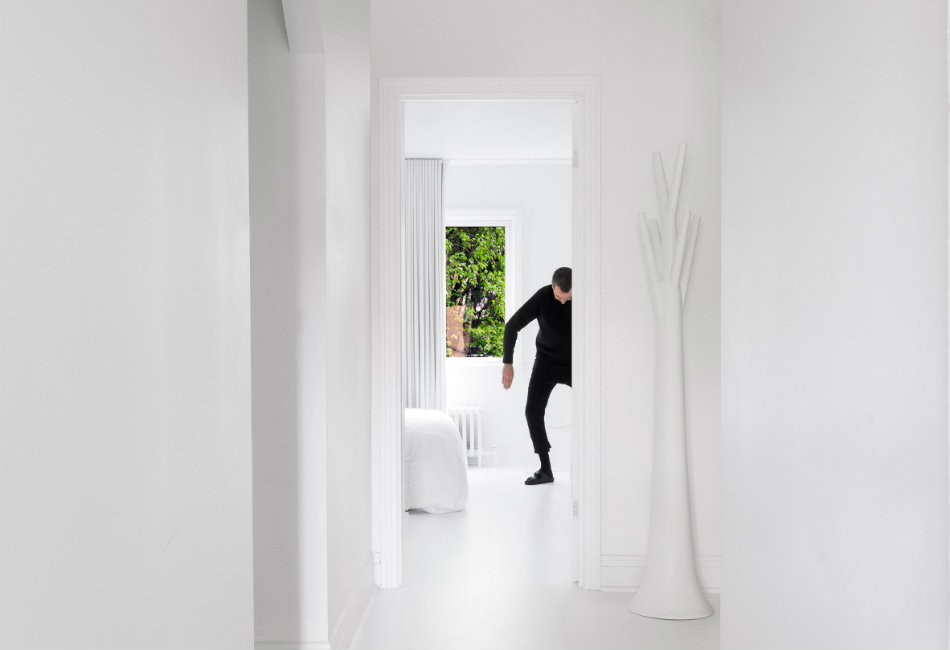 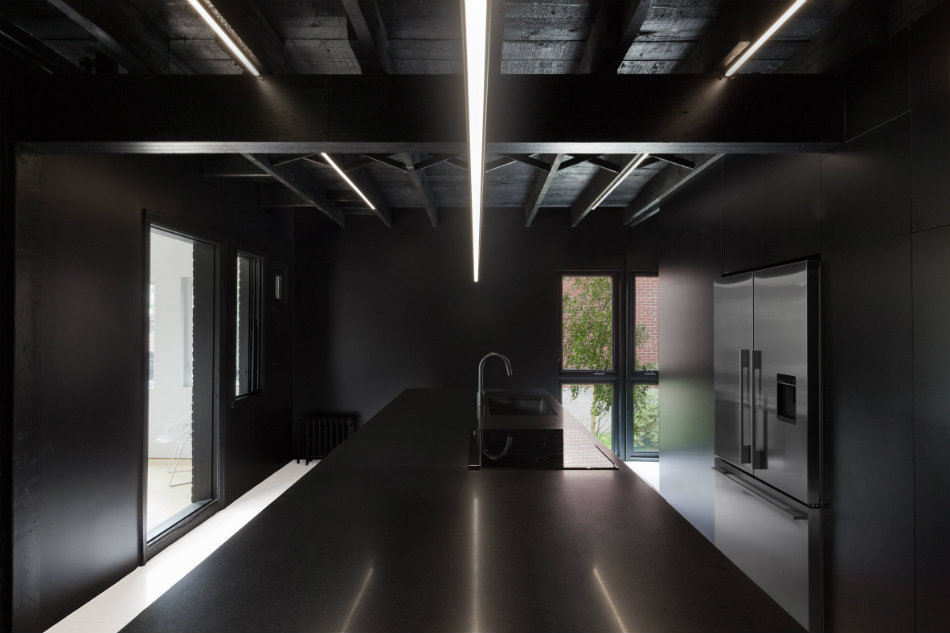 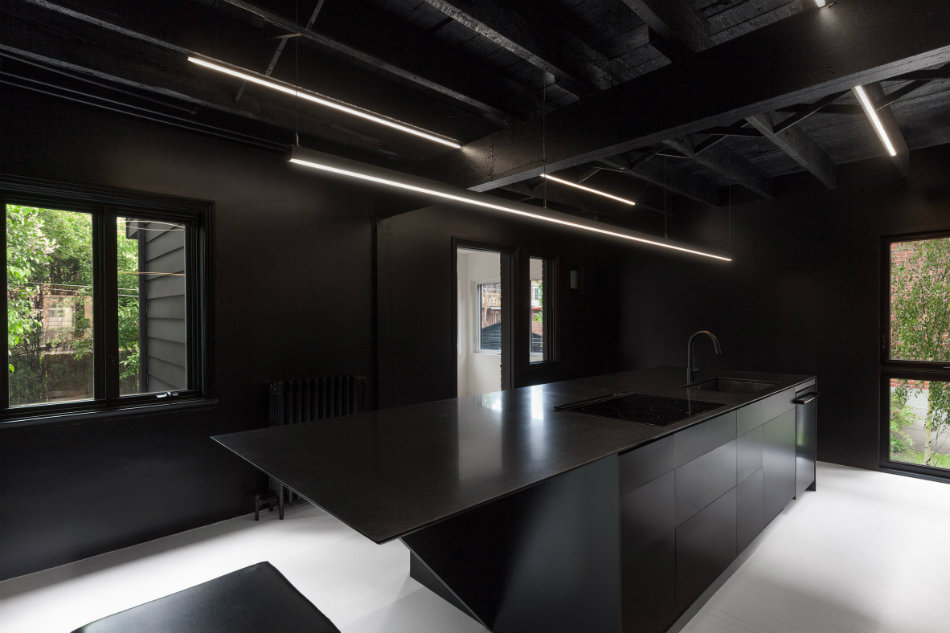 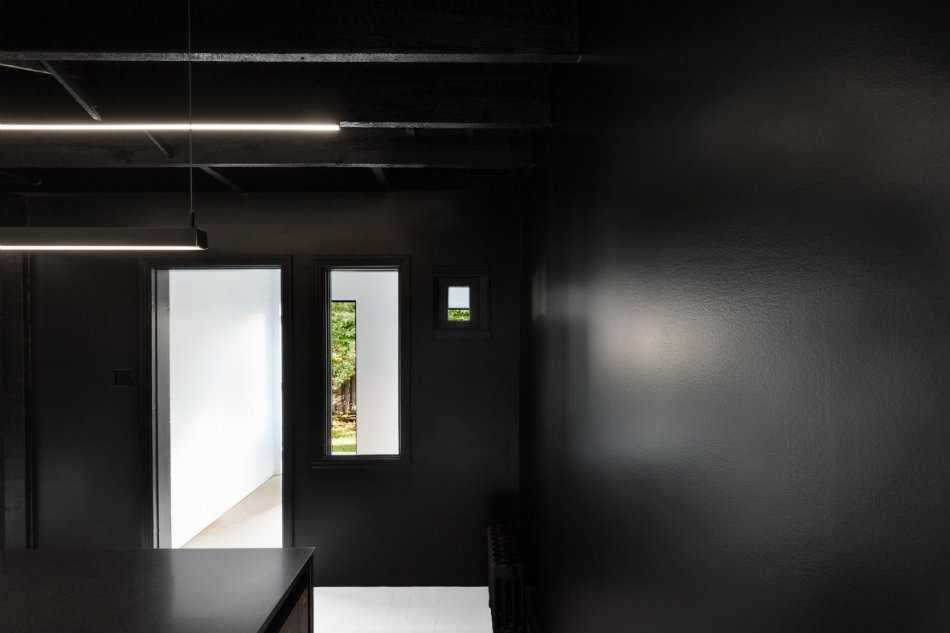 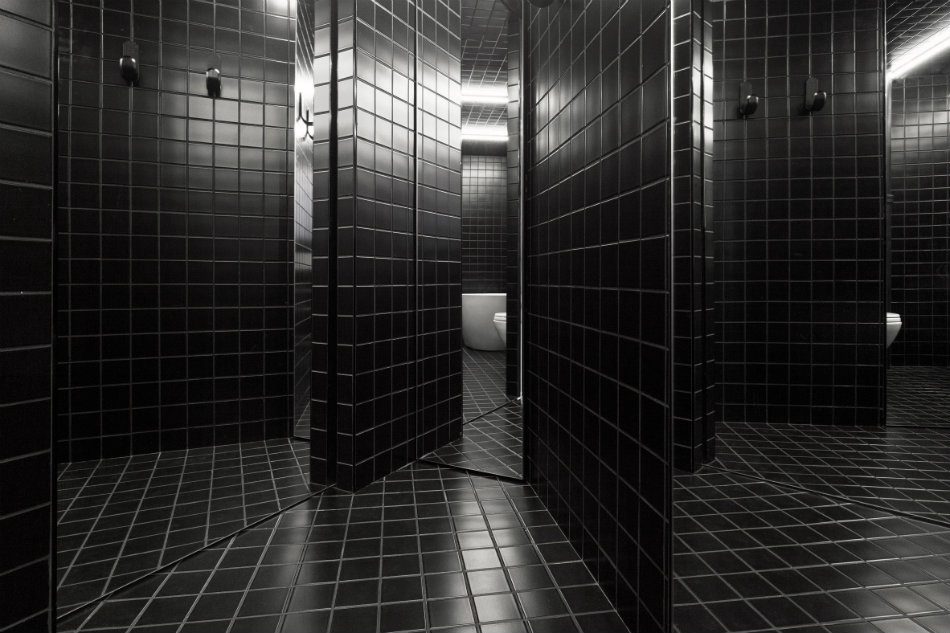