This unconventional design by Pitsou Kedem blurs the borders between private space and outdoor space. In a new building, in the old north of Tel Aviv, a unique penthouse covering an entire floor of some 600 square meters, is open and transparent in four directions,.

The entire penthouse is wrapped with a screen of clear walls. The internal spaces, floating within the building’s shell, are fully exposed to the city. Passages and movement, or corridors in conventional design language, to the rooms and then, on to the apartment’s spaces are next to the structure’s outer shell.  No rooms connect with this outer shell and no rooms block or shut off the view over the city. The levels of transparency and exposure are regulated using various methods of shading. Thus long and continuous lines of sight are preserved from one of the apartment to the other.

Along the entire frontage, some 25 meters, there are transparent, teak framed, sliding doors which allow for the opening and closing of the various internal spaces, such as bedrooms and bathrooms, to the external shell. Thus the city merges into the apartment, the climate is regulated and the residents can enjoy the sky line and changing lights at any given time.

The apartment’s style corresponds with international styling whilst retaining classical influences in the spirit of the period. Such as, for example, the style of French architect Jean Prouvé whose work was unembellished, placing the emphasis on practicality.

The materials used in the apartment’s construction are, for the most part, shown in their raw state.  The floor is poured terrazzo and an exposed concrete wall in the living room is offset with a metal bookcase. The pool is completely covered with dark stone so that the city can be reflected in its entirety in the water. Along the balcony we find planters with Frangipani trees that reflect and continue the characteristic flora of many Tel Aviv gardens.

The apartment’s residents have an impressive collection of art. This played a significant role in the design of the spaces, each of which relates to the specific piece displayed in it.

And the responsibility for bringing a smile to the design has been given the yellow hue that has been used in the main door, the closet and additional touches of yellow scattered around the apartment. 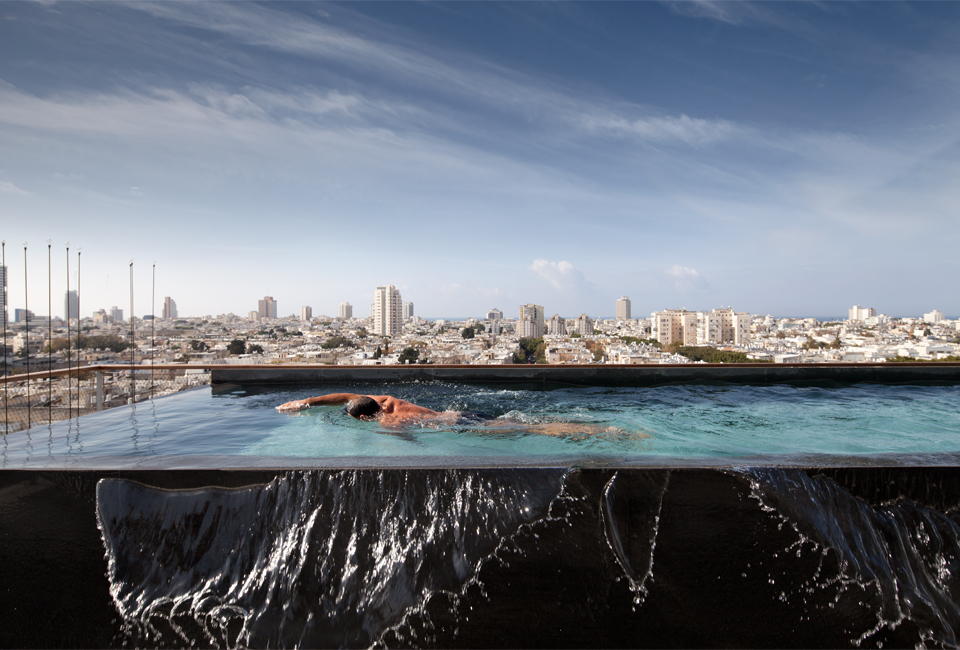 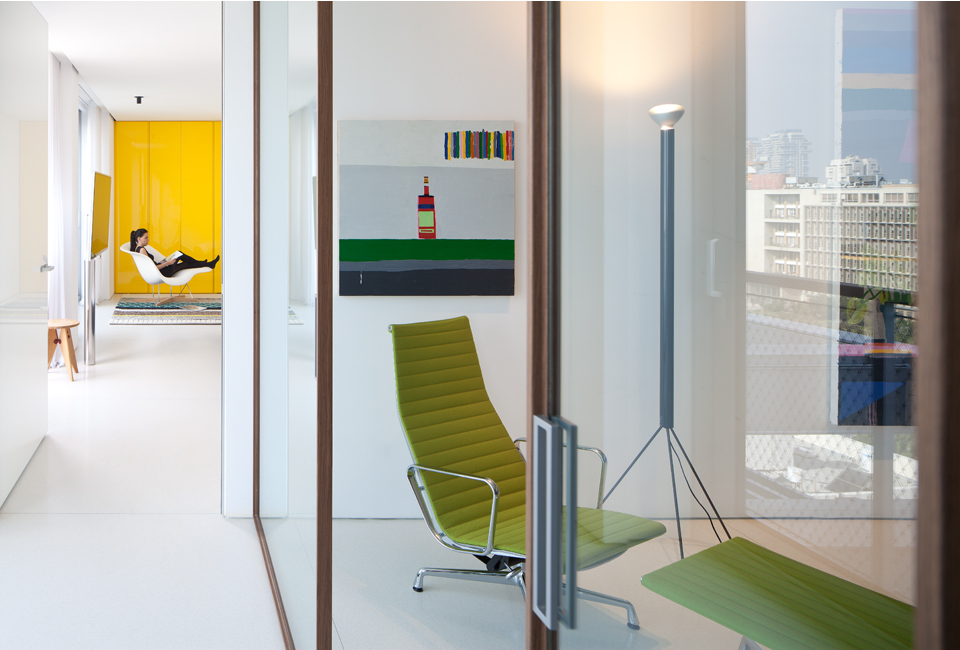 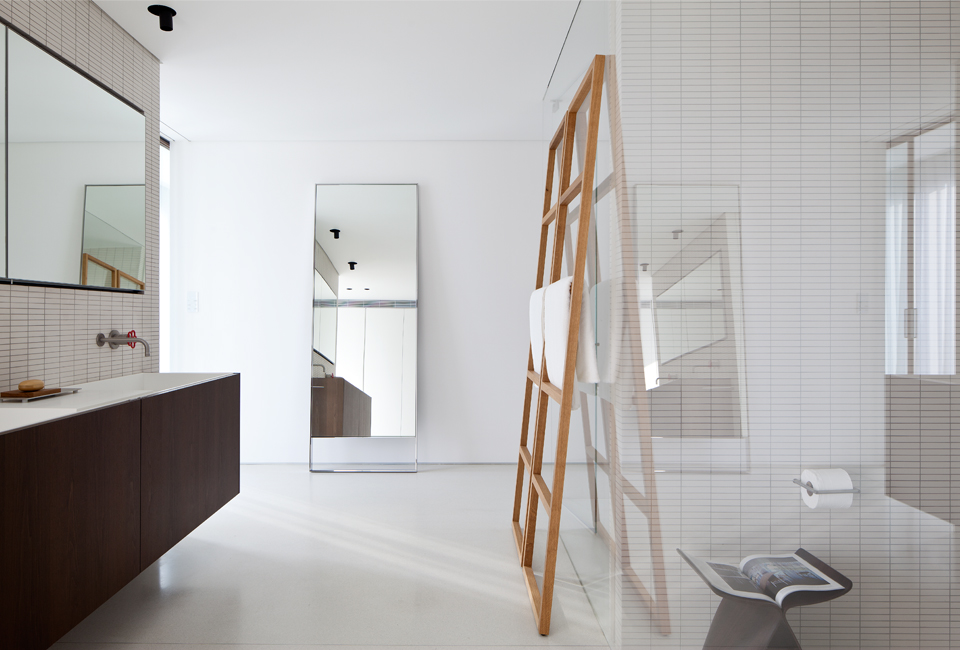 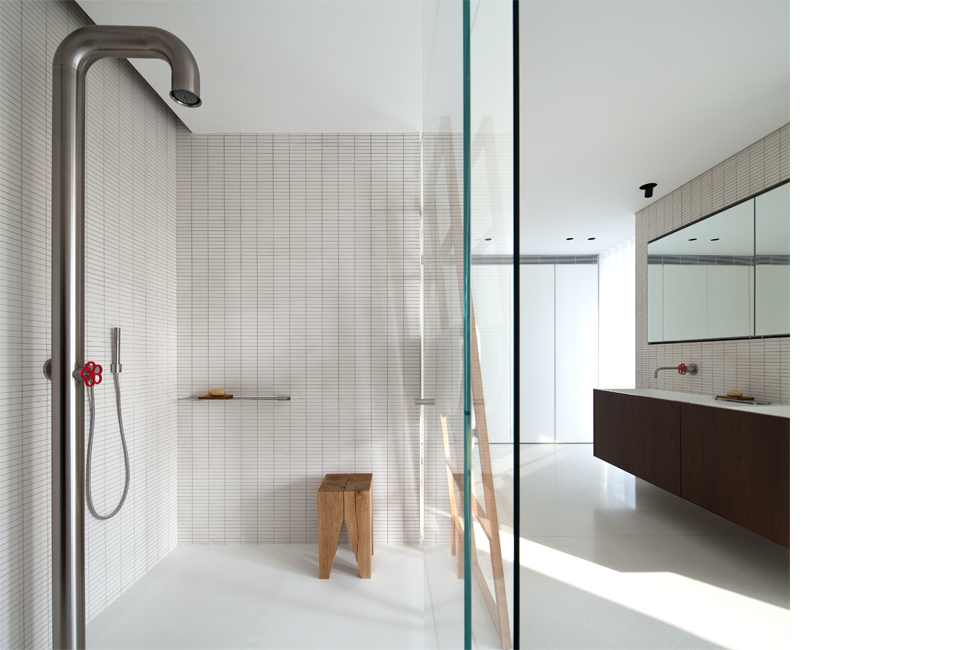 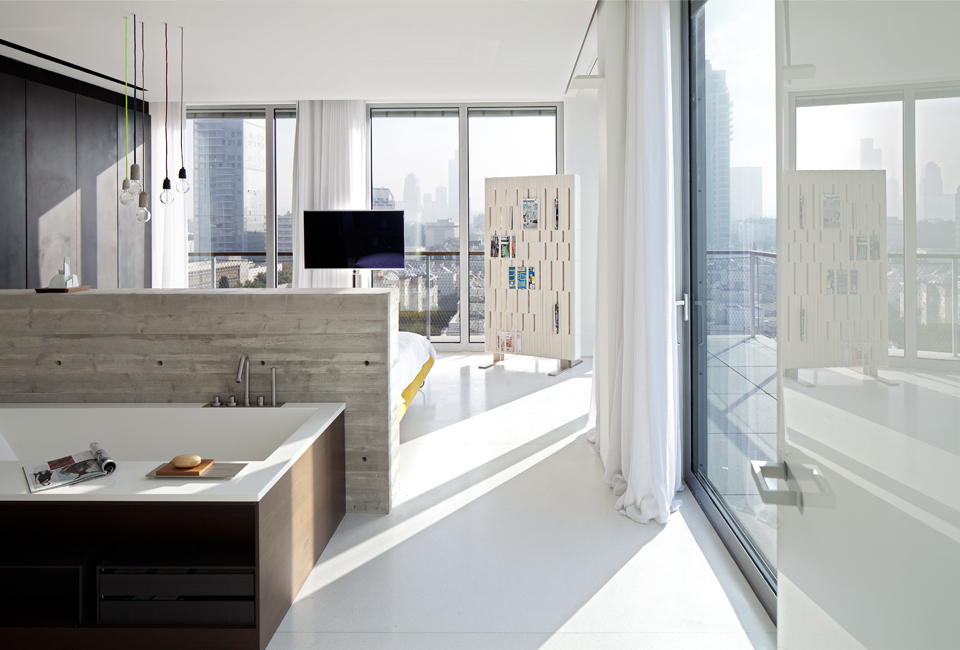 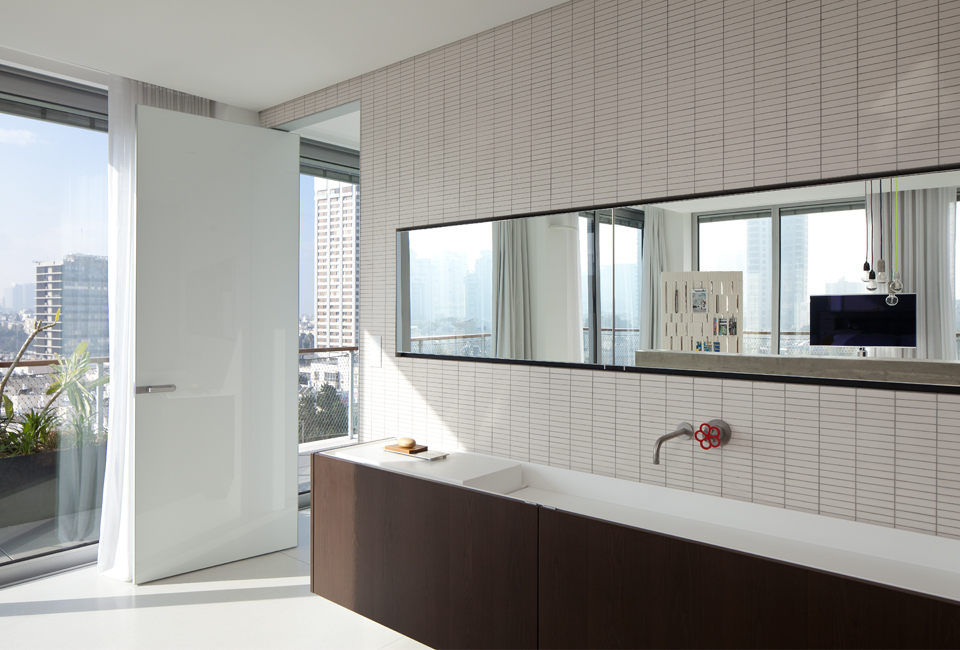 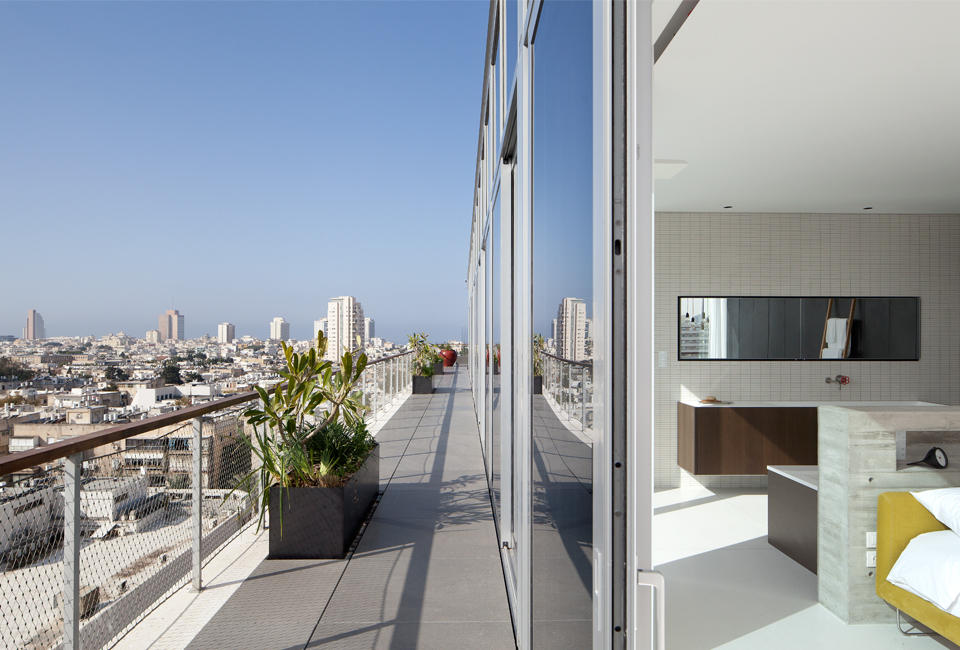 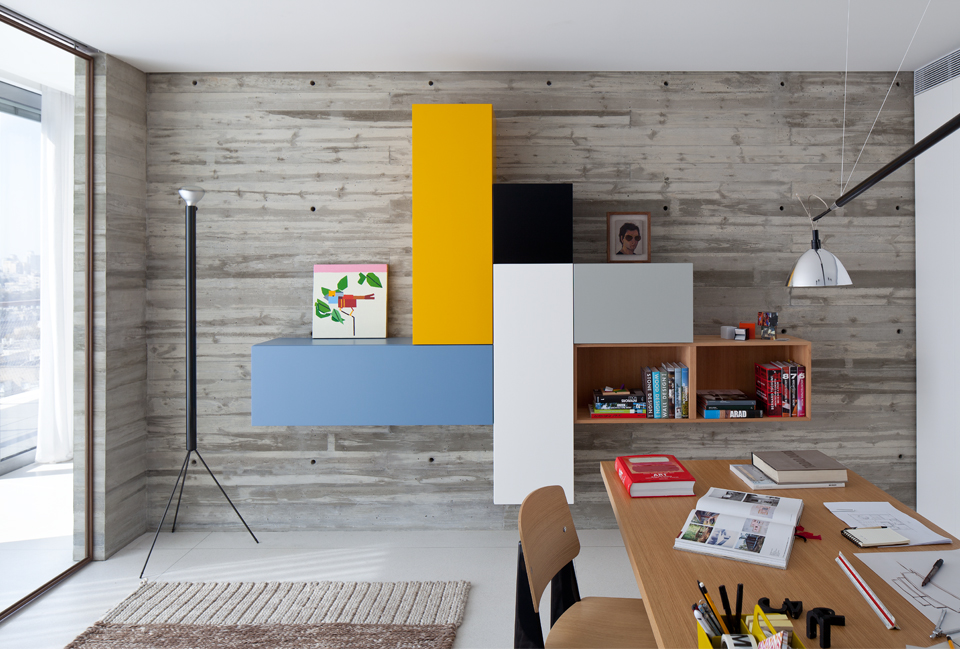 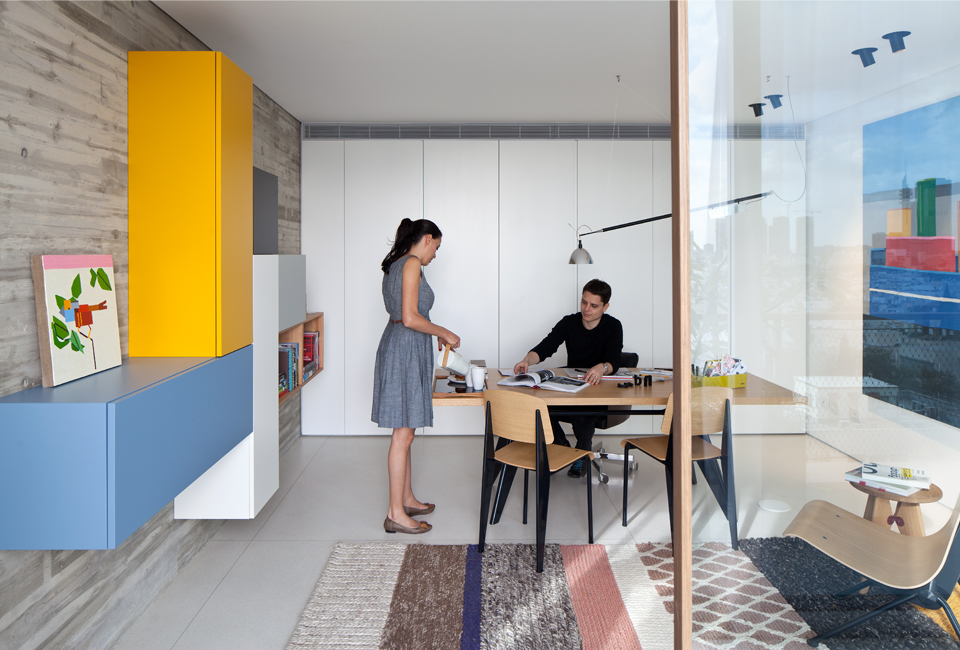 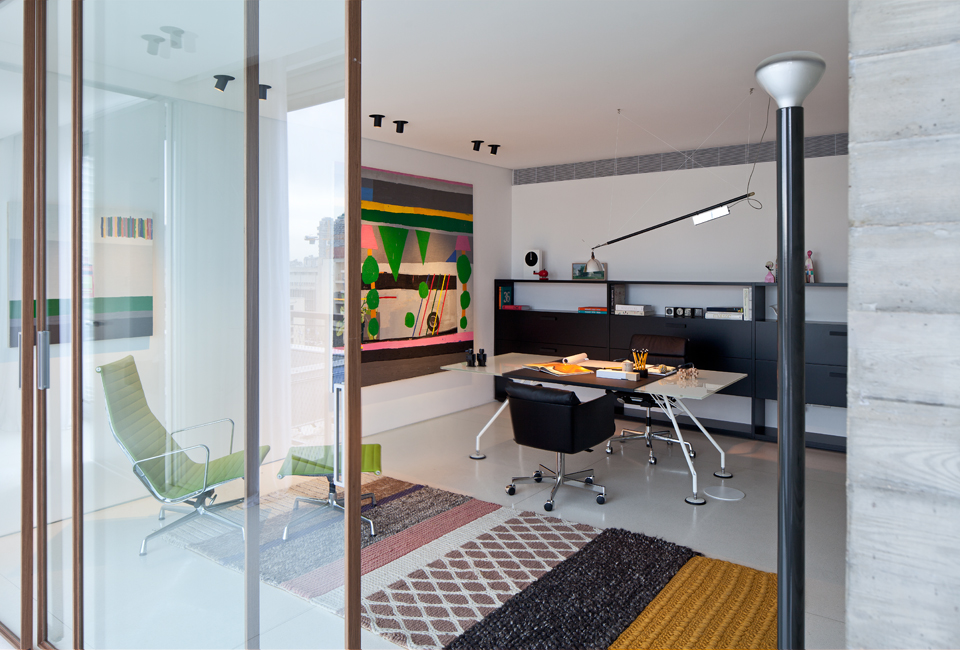 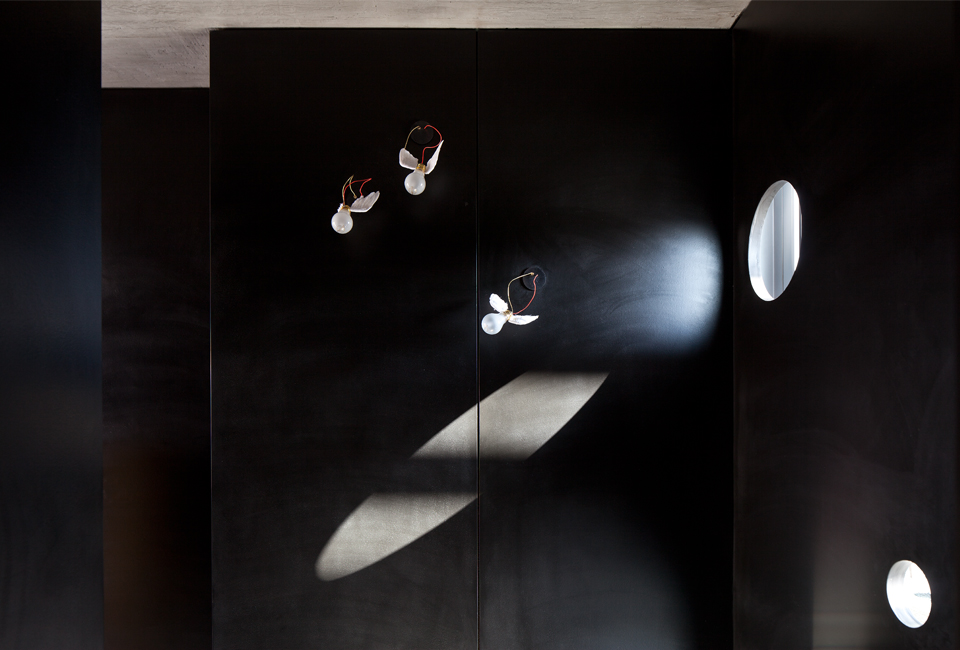 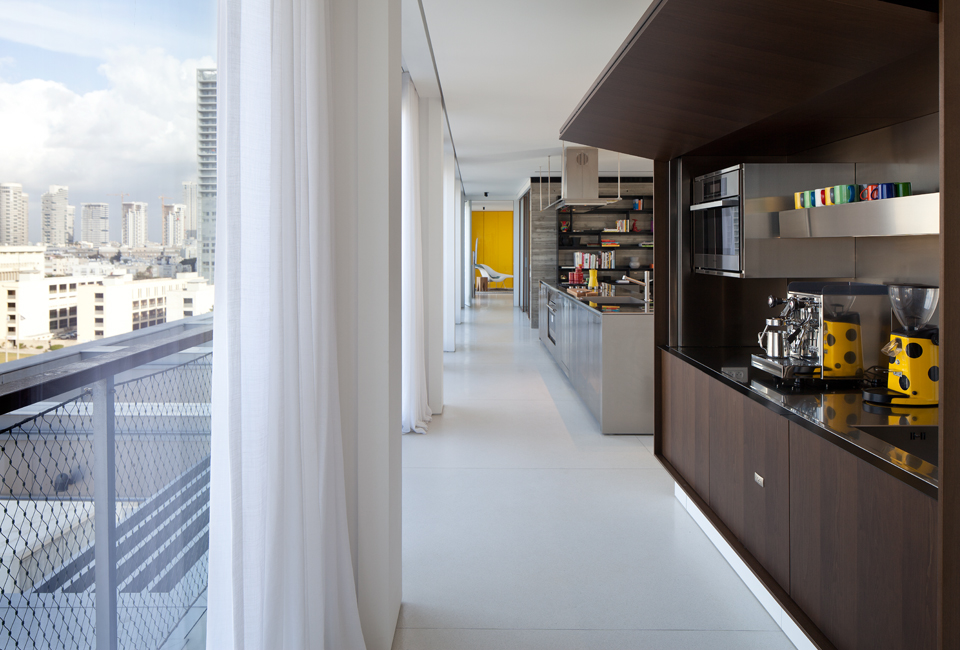 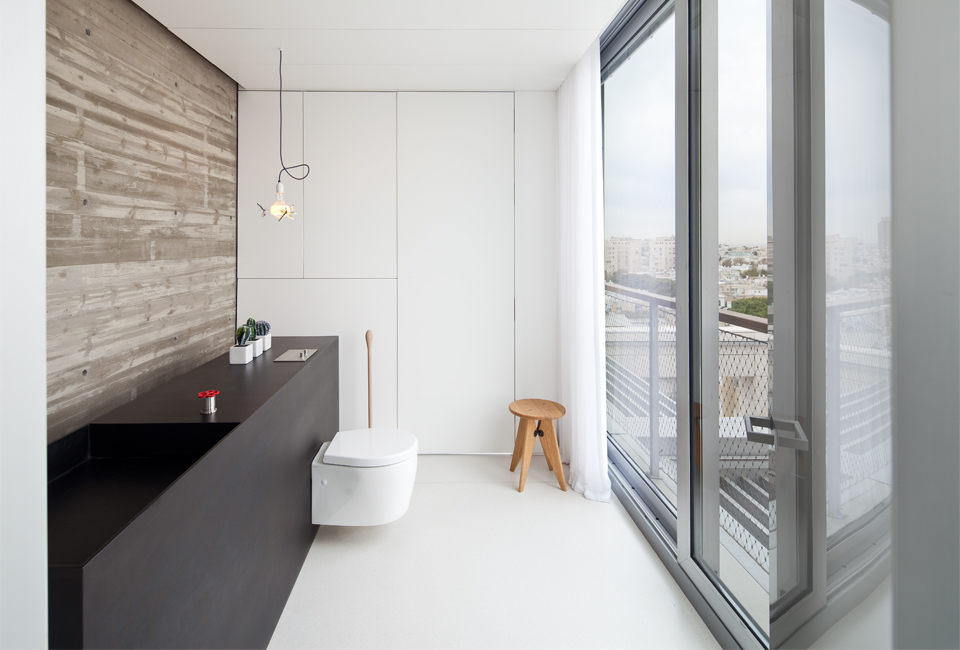 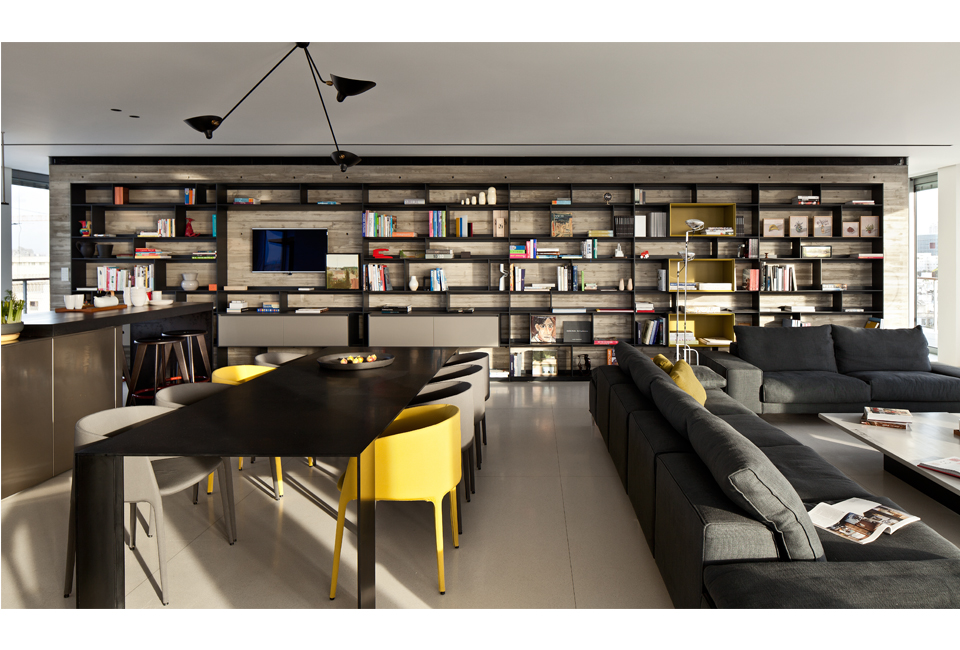 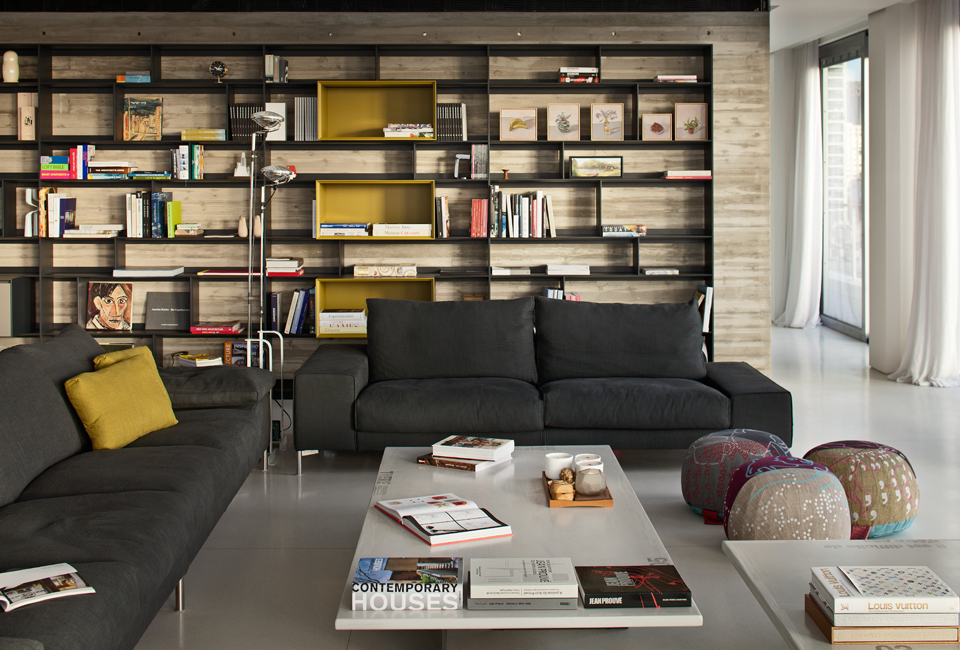 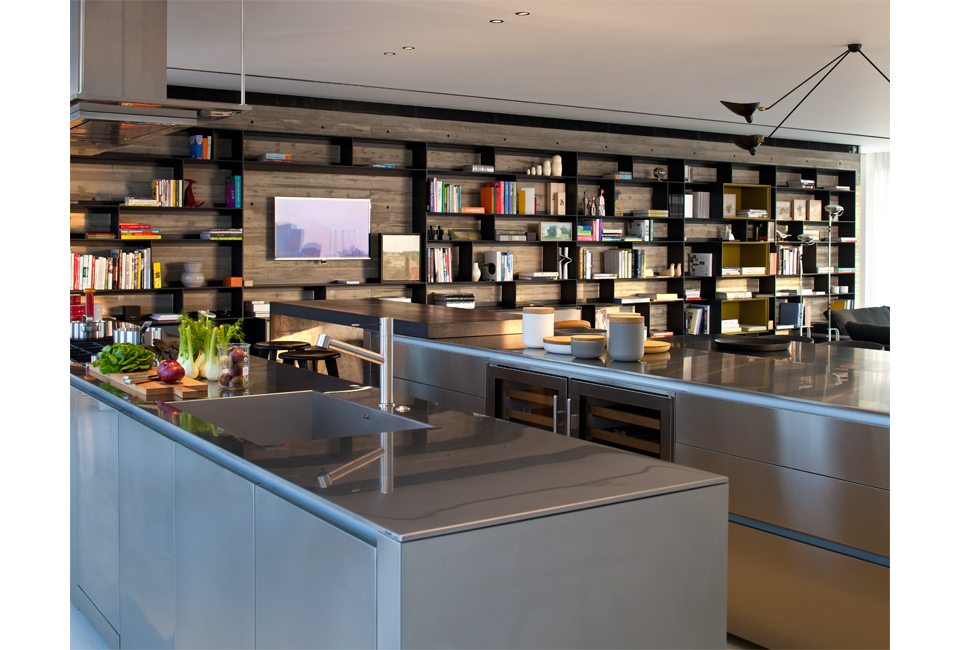 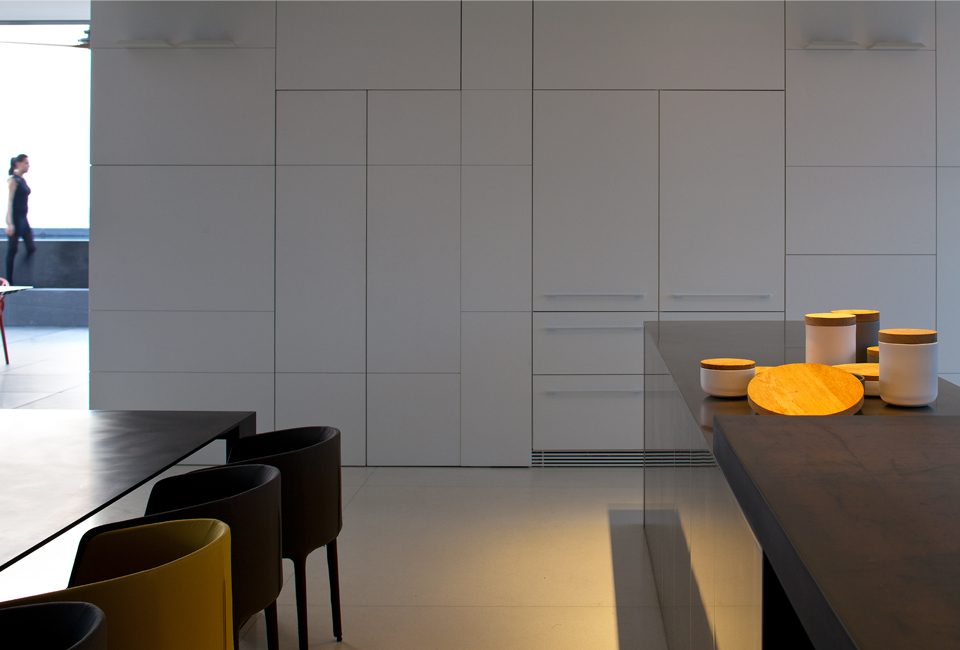 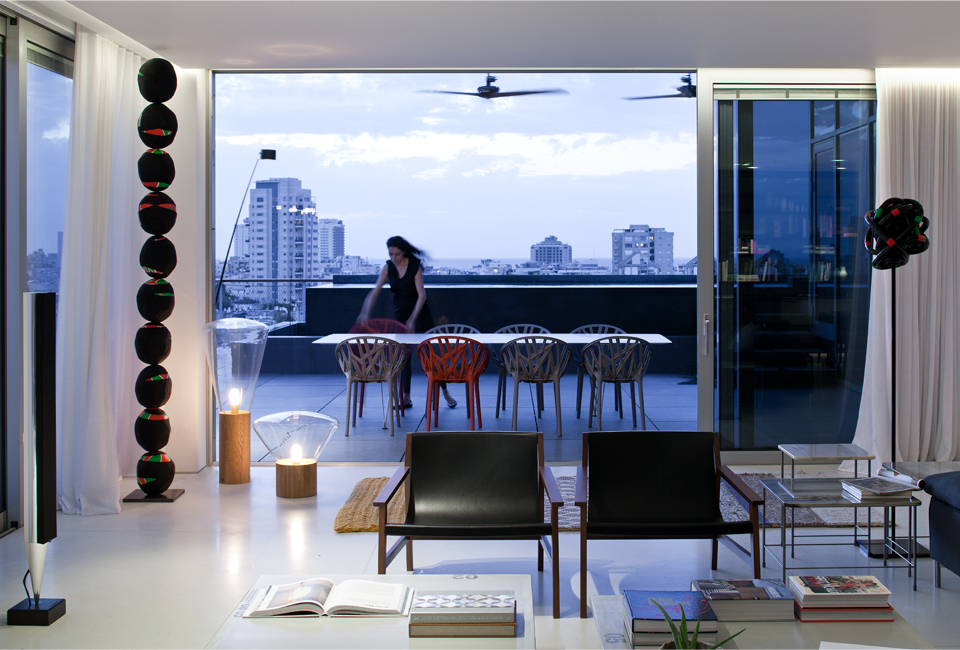 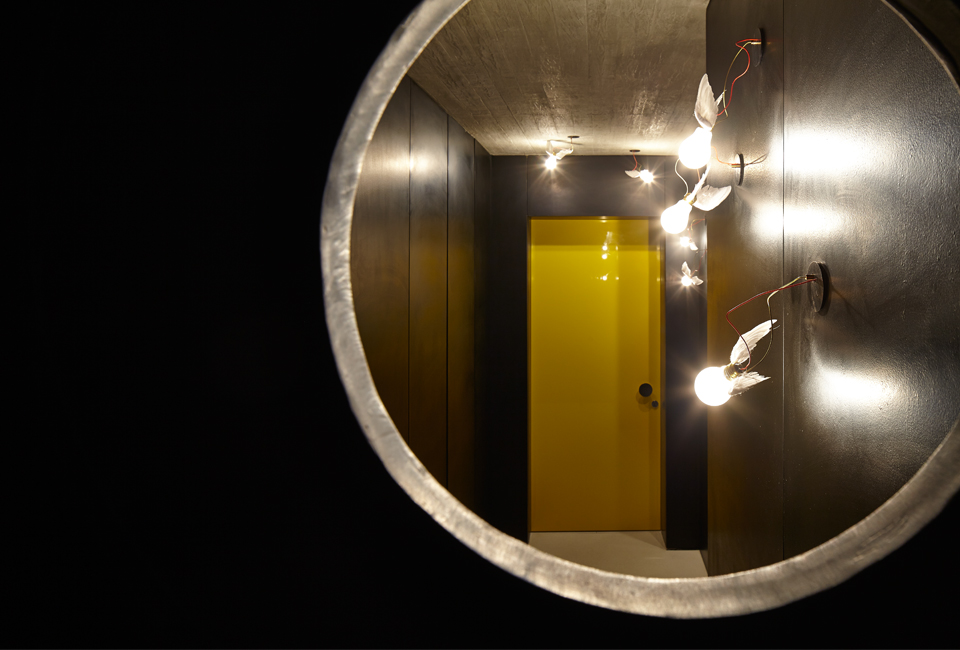 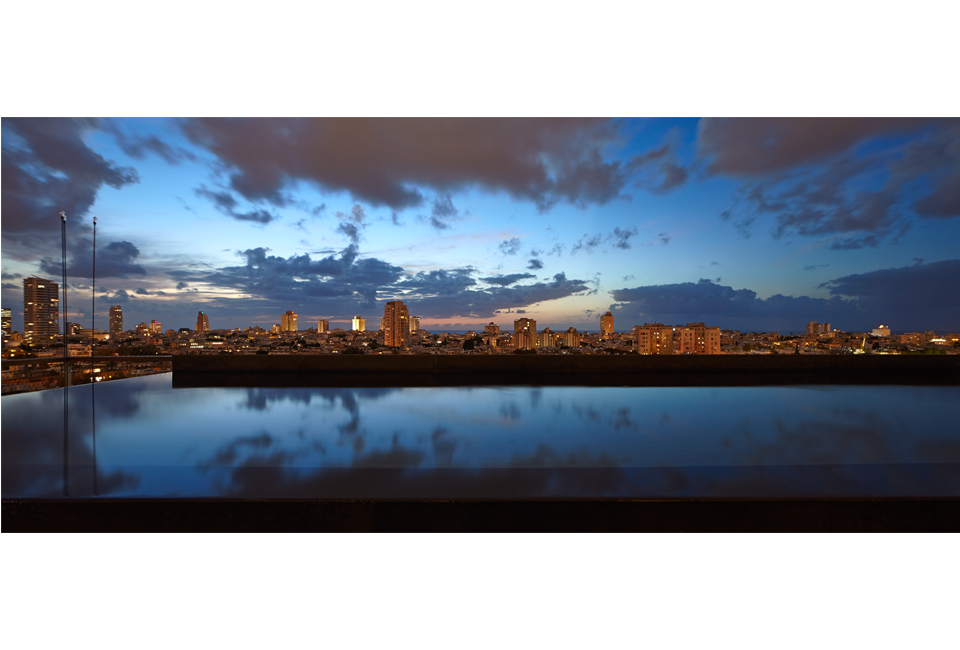