Early photographs of Picasso’s studio indicate that he displayed his cardboard Guitar construction in at least two ways: as an independent object and as part of a larger still life assemblage that also included paper and wood (all the elements of which were long and erroneously presumed lost). Picasso had in fact elected to save only Guitar and the curved “tabletop” he had created to go beneath it, when he disassembled this still life. He packed these two selected components away together, most likely in autumn 1916, and subsequently left both pieces to the Museum upon his death. In 2005 a query from art historian Christine Poggi prompted the rediscovery of the tabletop in MoMA’s storage. Reuniting the tabletop with the Guitar for the first time since Picasso packed them away together almost a century ago prompts reconsideration of the distinct yet interrelated histories of two of his most iconic works. The cardboard Guitar’s variable modes of installation are characteristic of Picasso’s combinatory process during the two years that separate its creation in 1912 from its reiteration in sheet metal in 1914. Picasso: Guitars 1912–1914 is the first time that the cardboard Guitar is publicly exhibited with this distinctive element.

In 1914 the artist memorialized his fragile, papery Guitar construction in more fixed and durable sheet metal form. No welding holds together the planes of the construction; instead it is sewn together with wire in just a few ingeniously selected spots. Its projecting planes create a sense of volume, generating real shadows rather than the rendered shading historically used to simulate depth in painted and graphic art. Though closely related to the cardboard Guitar, it is very different in texture, color, pliancy, and durability.

Central to the exhibition are a selection of photographs taken by Picasso of in-progress or recently completed works, staged for his own small, hand-held camera. Several of these images capture the cardboard Guitar, surrounded by works on paper, installed in the artist’s Paris studio. Copies of the avant-garde journal Les Soirées de Paris, no.18, in which photographs of Picasso’s radical Cubist assemblages were first published, are also on display. The exhibition includes a sketchbook of over 100 drawings from 1913, presented in a digital kiosk, highlighting the artist’s interrelated working processes as a draughtsman and a sculptor and his particular focus on the subjects of a figure playing a guitar and a still life with a guitar.

Picasso: Guitars 1912–1914 affords a rich picture of Picasso’s process as he engaged with different materials, mediums, and techniques in an extraordinary cross-pollination of practices. Among the notable works on view are: Guitar (1912), Siphon, Glass, Newspaper, and Violin (1912), Musical Score and Guitar (1912), Violin Hanging on the Wall (1912–13), Guitar (1913), and Bar Table with Guitar (1913). For his painting Guitar, from 1912, Picasso paired traditional craftsman’s techniques used to imitate wood-graining and marble with bold, contoured planes. In the still life composition Siphon, Glass, Newspaper, and Violin, Picasso incorporated cut-and-pasted newspaper as both figure and ground, complicating the space occupied by his graphic still life.

Like pieces of a crude jigsaw puzzle, the cut-and-pasted components of the 1912 collage Musical Score and Guitar fit together in a summary account of an instrument’s contours. The commercially printed sheet music included in the work evokes the popular cabaret songs of Picasso’s life in Paris. Color and texture erupt across the surface of the 1912–13 painting Violin Hanging on the Wall. For the bold curves of the instrument’s body, Picasso mixed together grit and rough commercial spackle to create an unusually rough crust of impasto. These heterogeneous ingredients, rarely associated with fine art, mark this painting as among the most materially radical in Picasso’s long career.

The near abstraction of Guitar, from 1913, seems opposed to the legibility of the cardboard and sheet metal constructions with which it shares a name. Featuring roughly cut pieces of colored paper and worn wallpaper fragments—which Picasso purportedly tore off the walls to incorporate into his artwork—Guitar suggests a rapidity in execution, contrasting with Picasso’s conceptually rigorous play with the minimum means of referencing a real object. Visitors to Picasso’s studio in the years before World War I remarked that his works barely seemed “to possess the physical stamina necessary to survive”; and yet Bar Table with Guitar, held together with nothing more than pins, has preserved its improvisatory air. Featuring brightly colored papers typical of Picasso’s work in spring 1913 in Céret, it is embellished with a few additions of chalk and charcoal, and provides a strong contrast with the works that had filled the artist’s studio the previous winter: relatively austere newspaper clippings pasted on a white paper support. 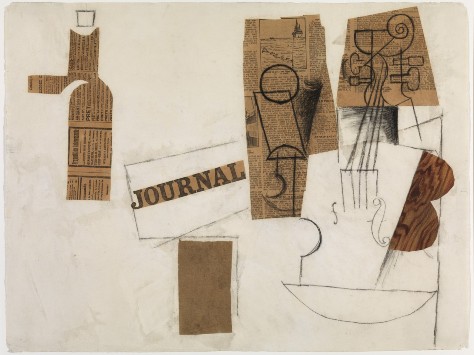 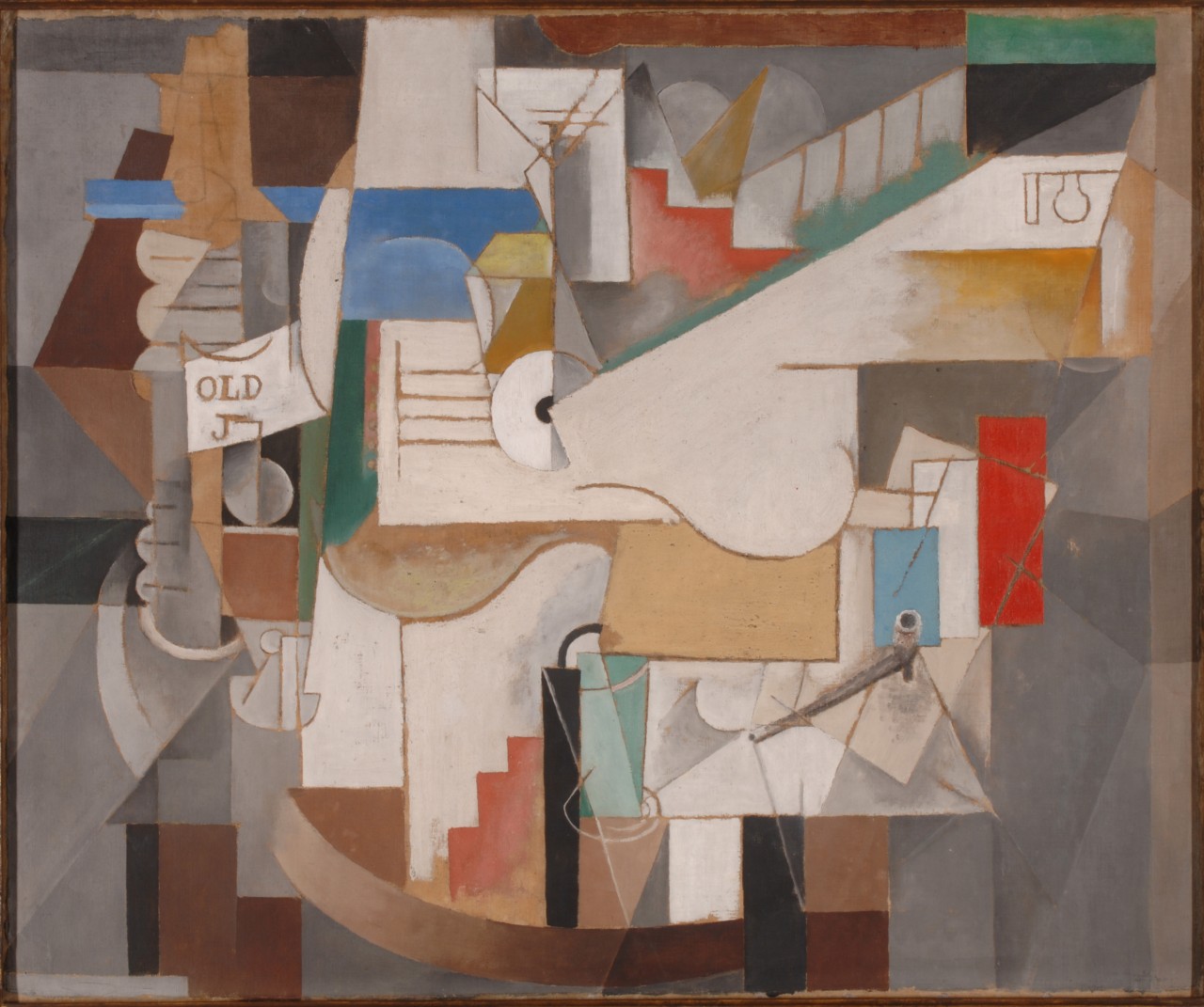 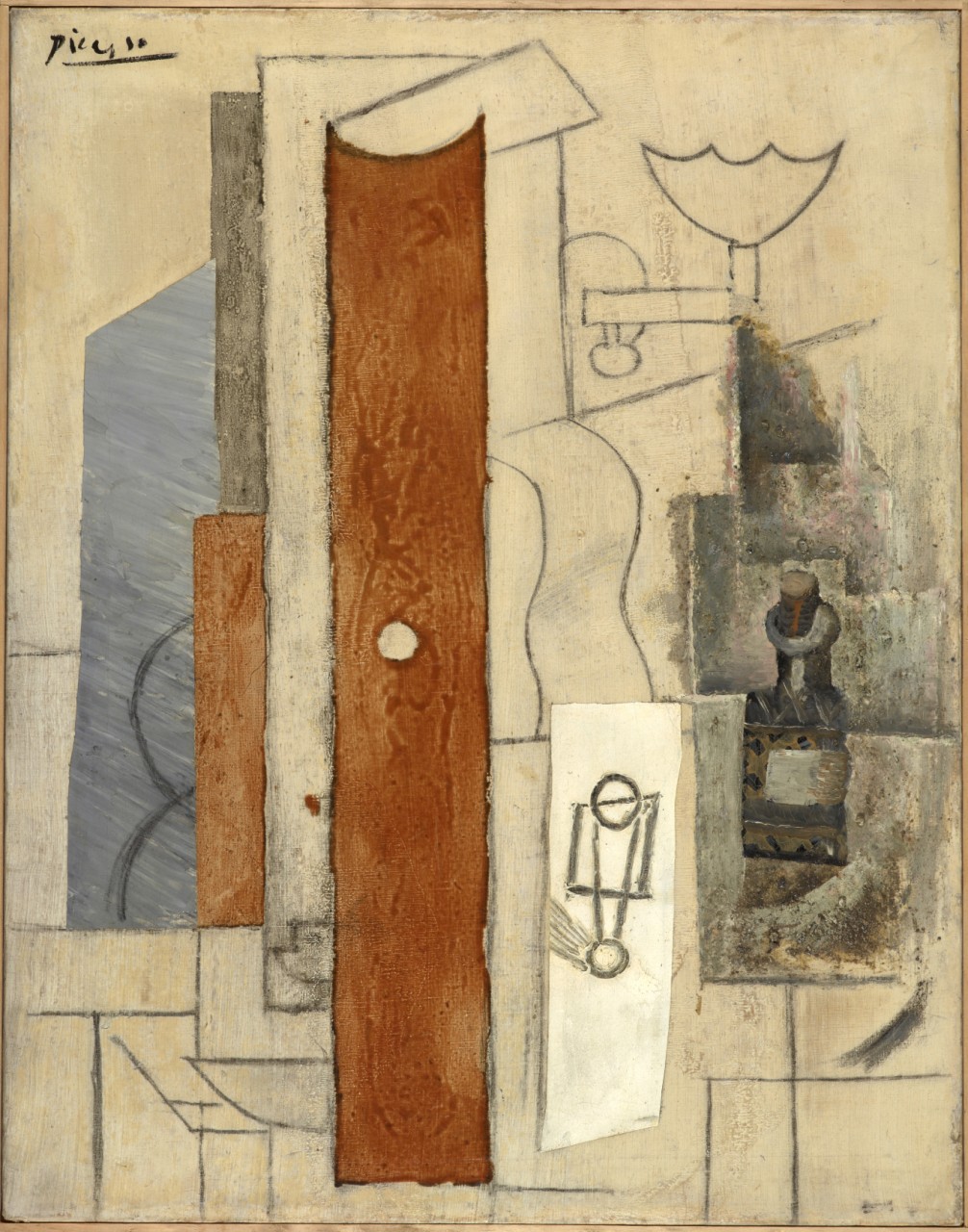 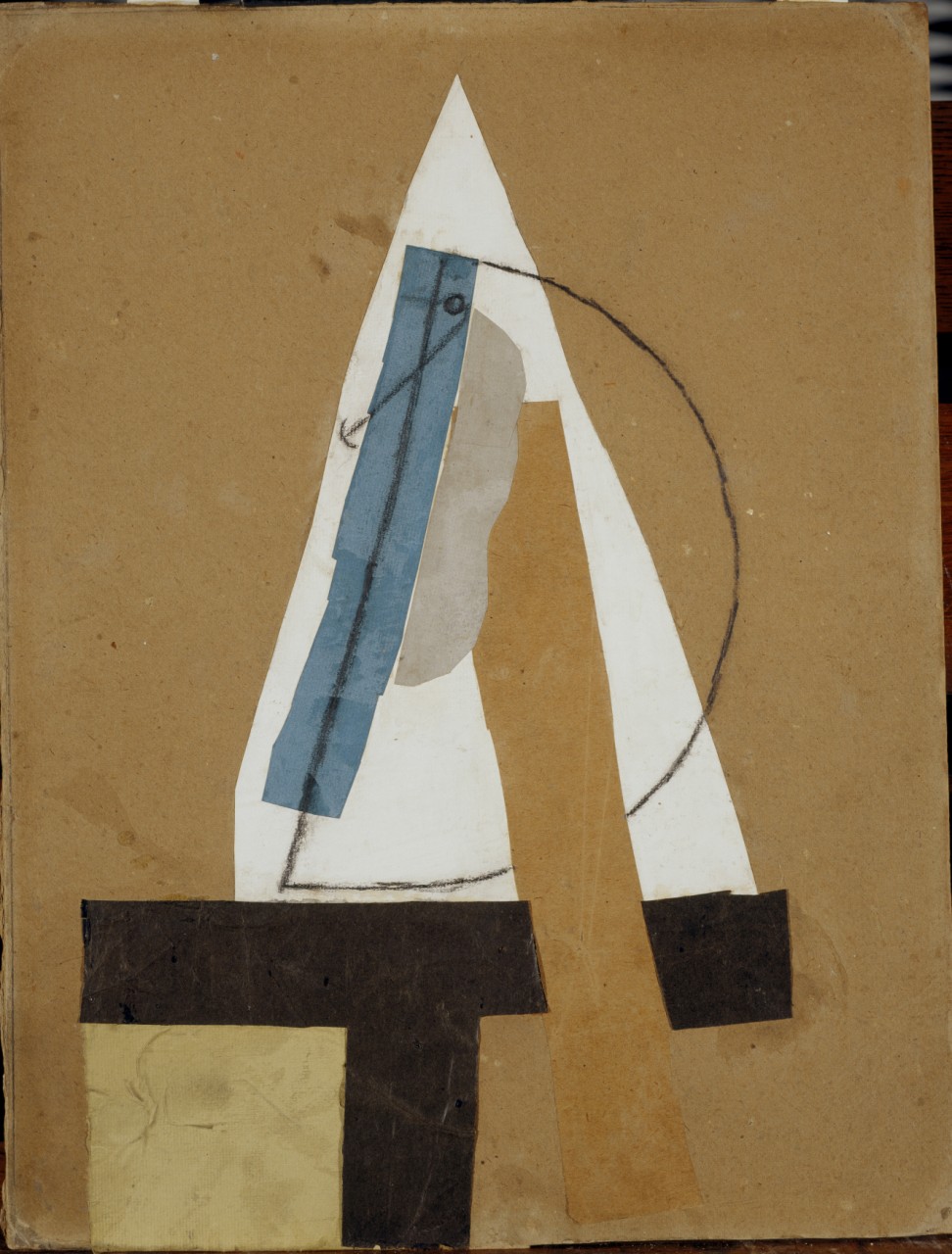 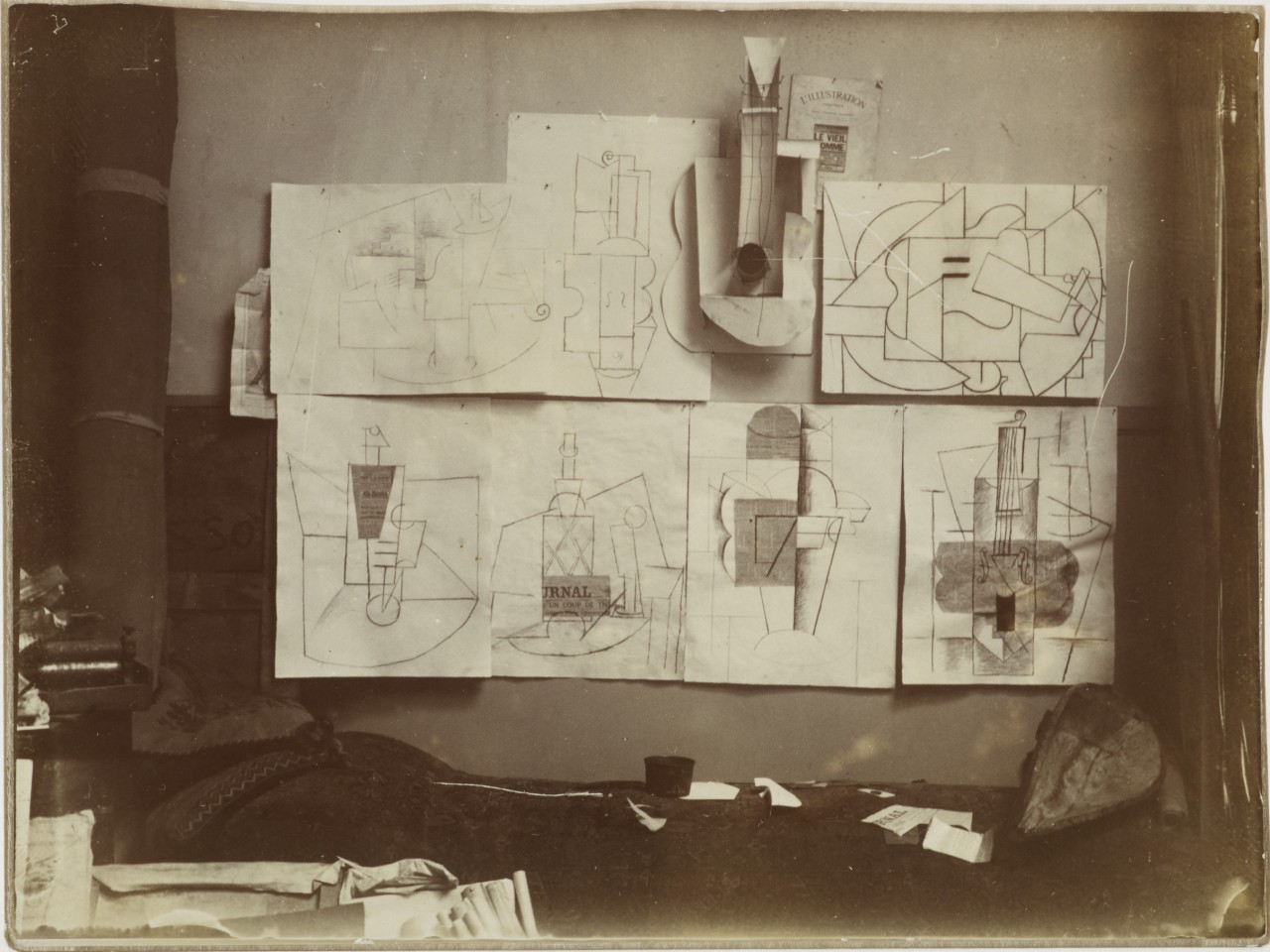 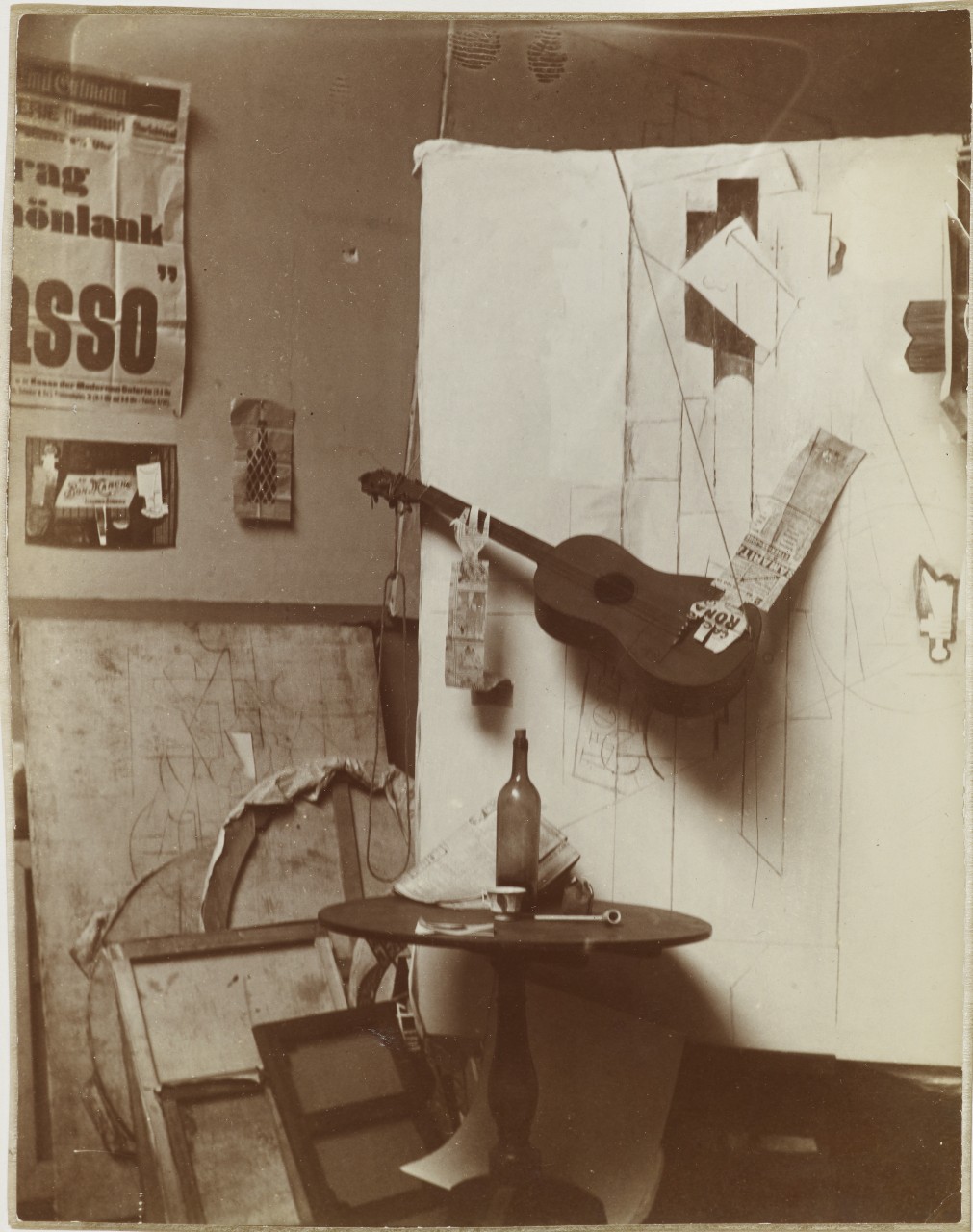 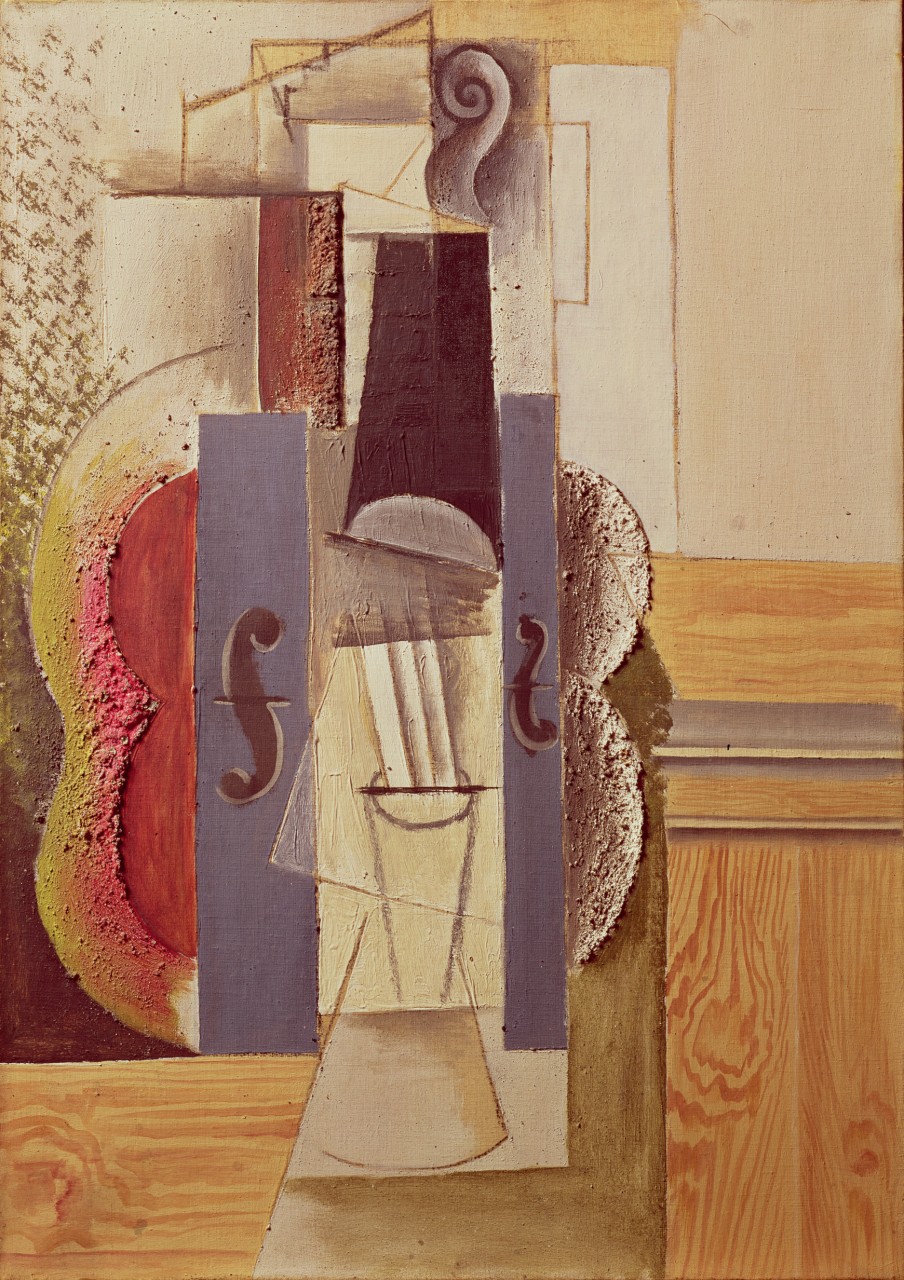 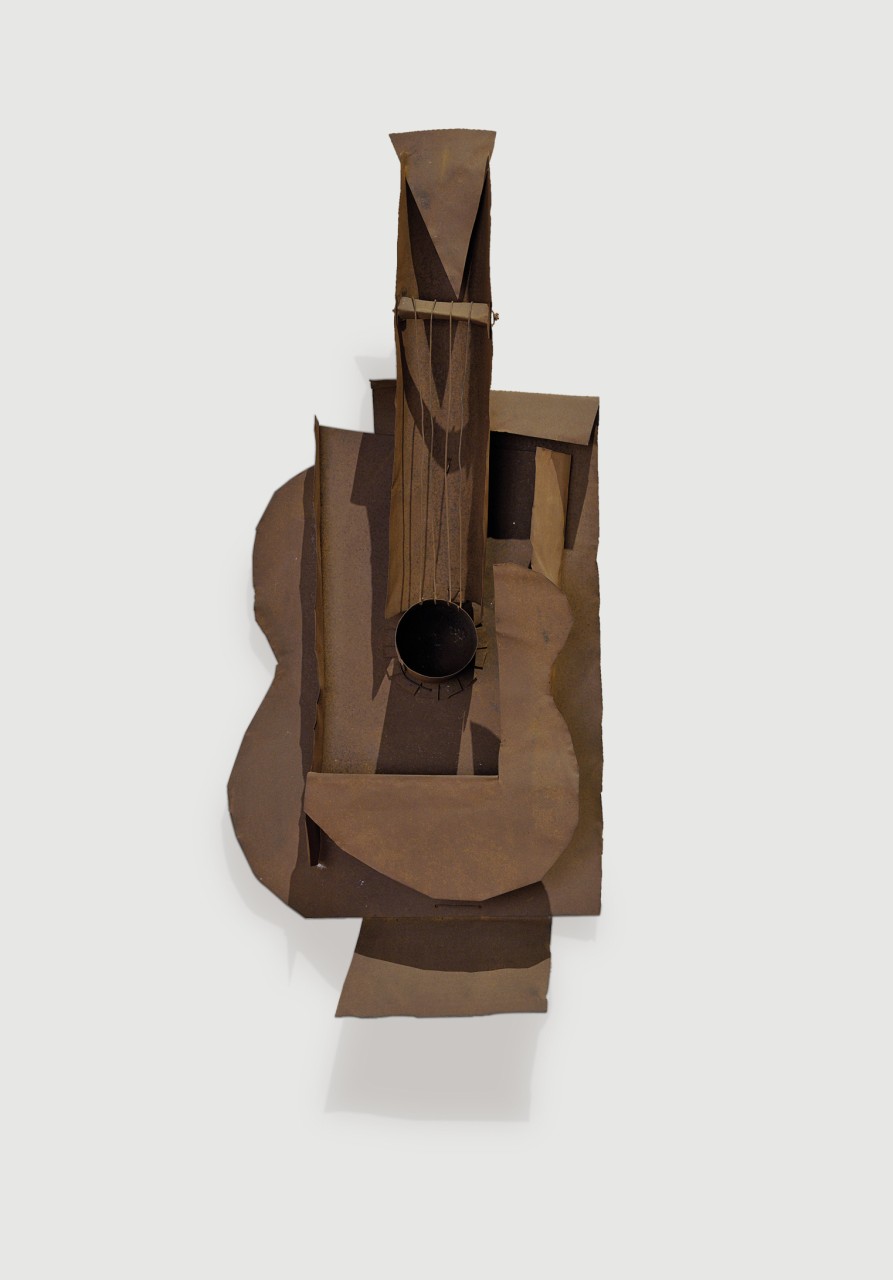 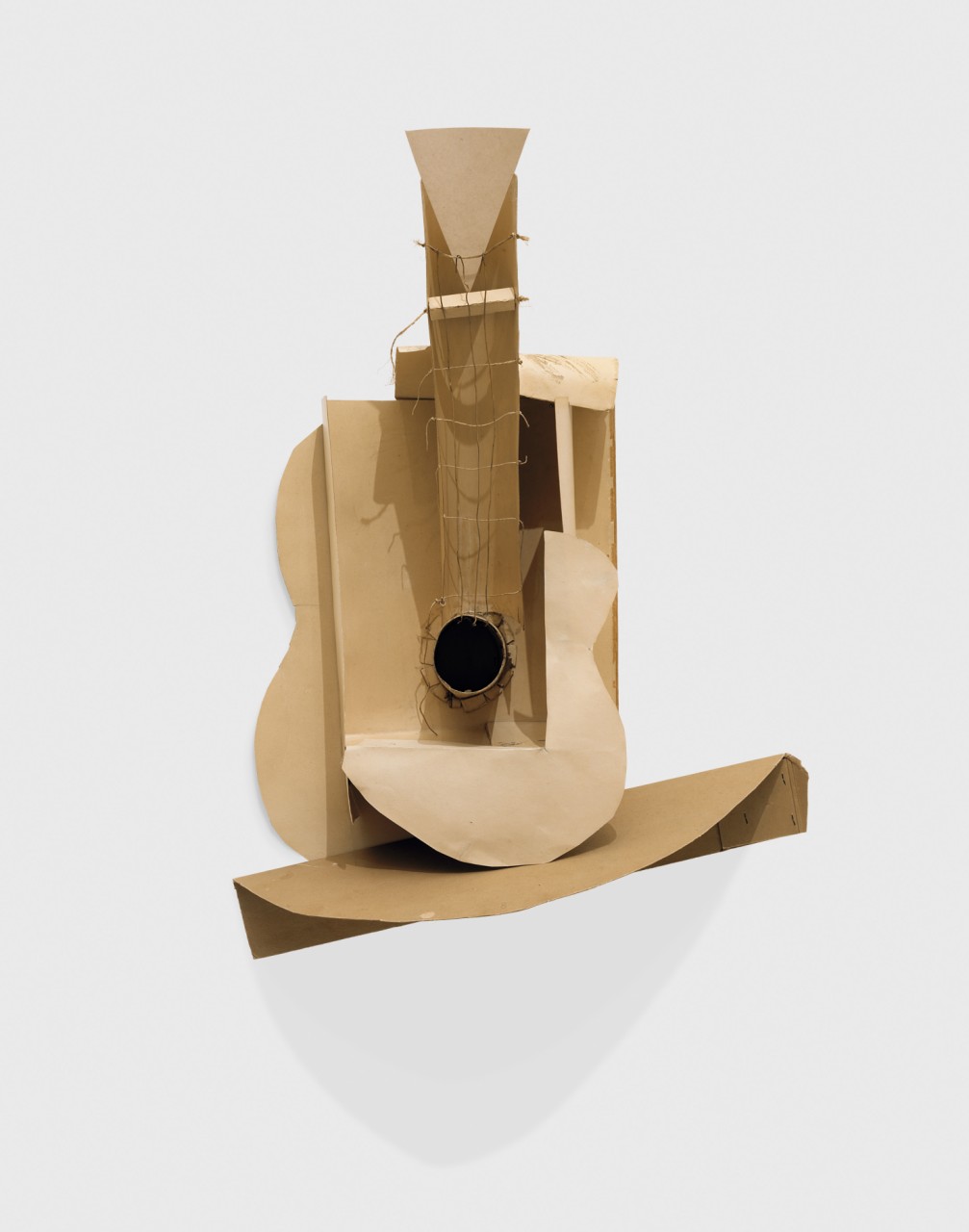 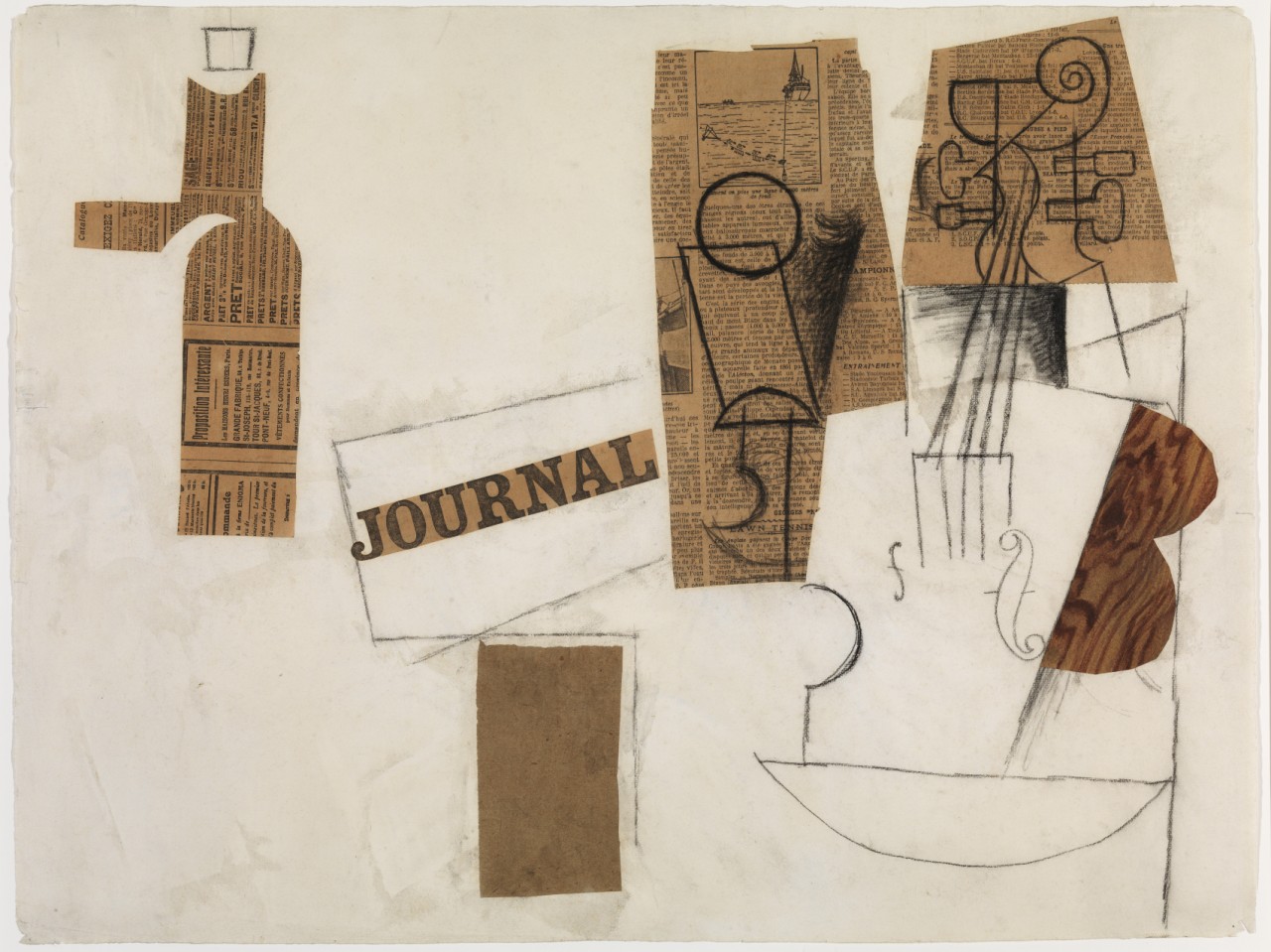 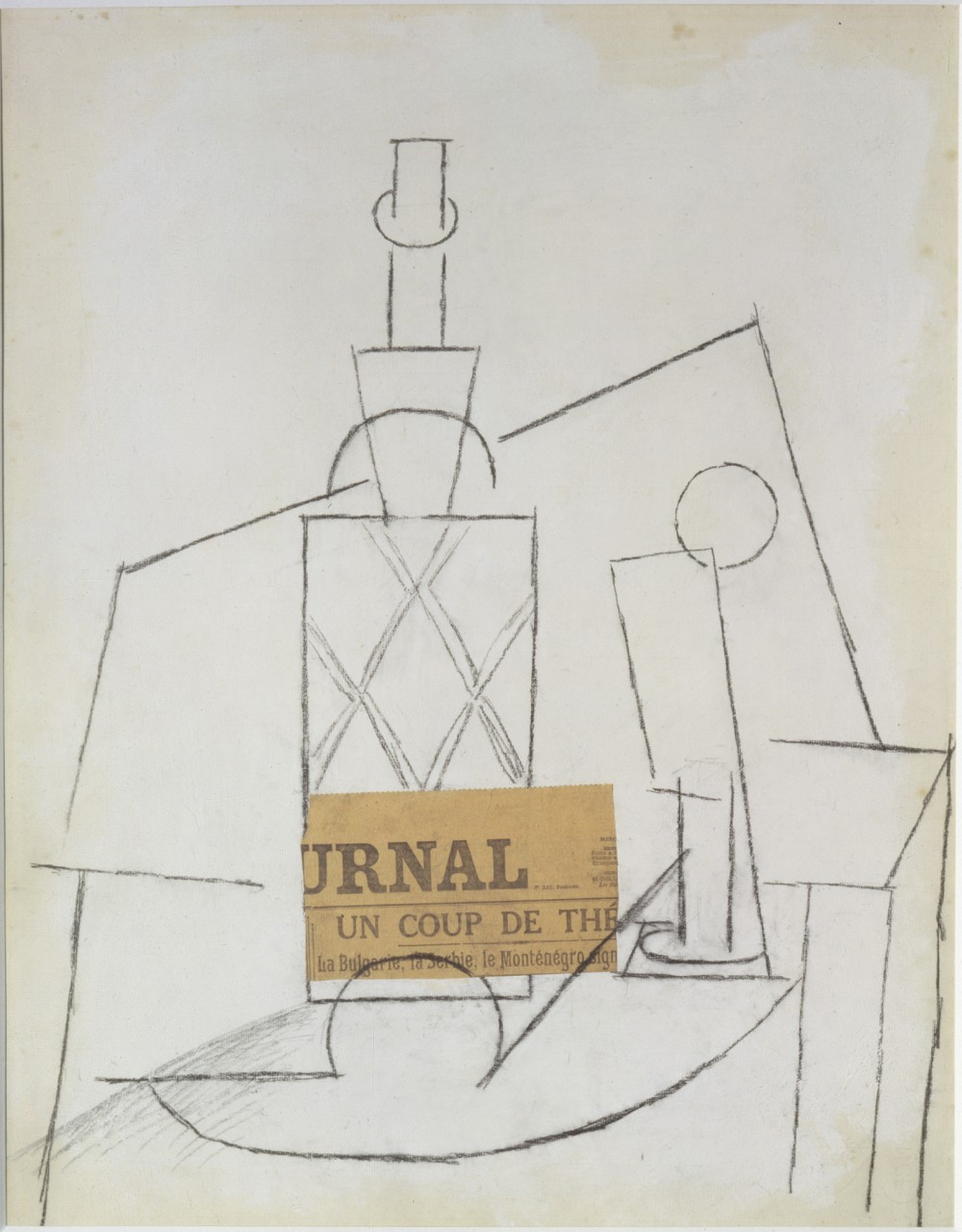 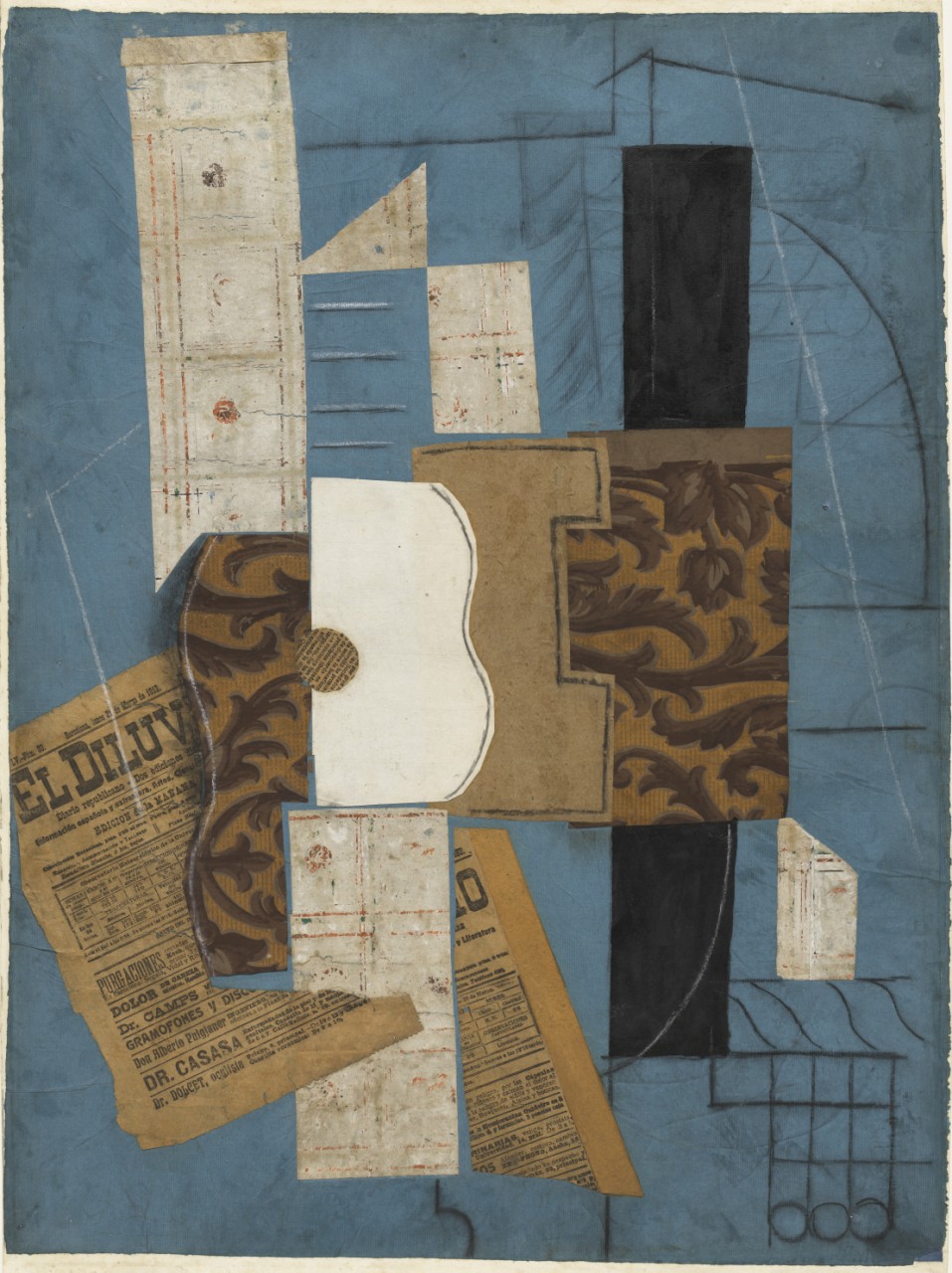 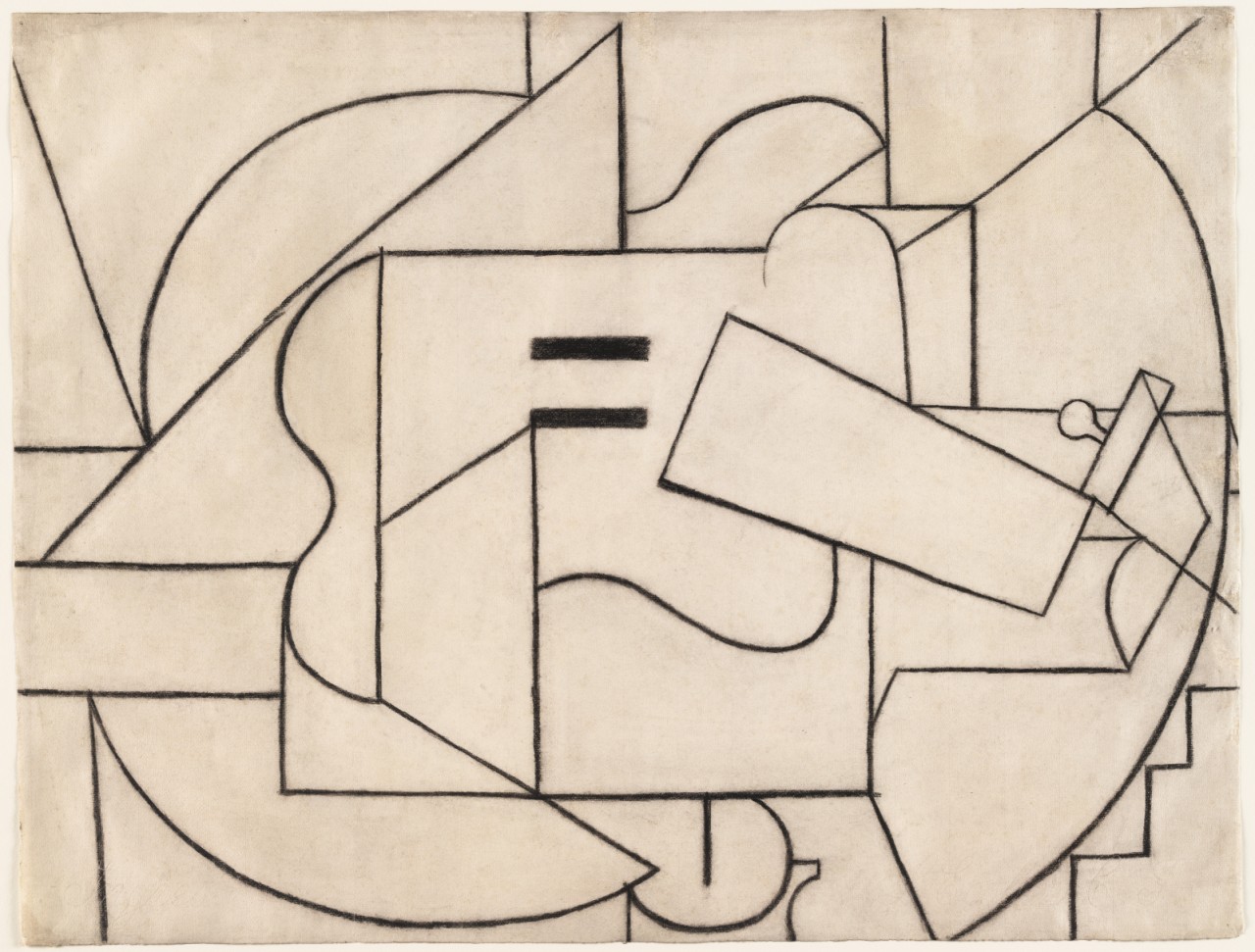